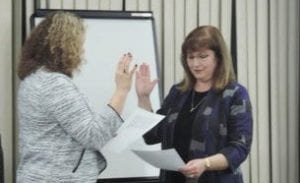 Board President Patrice Hatcher (left) administered the Oath of Office to Lisa Koegel, the newest Carman-Ainsworth School Board member who was seated last week at the board’s organizational meeting. She was elected in November.

FLINT TWP. — Four recently elected members of the Carman-Ainsworth Board of Education were sworn in last week during the annual Organizational meeting. The board also elected officers for 2017.

Taking the Oath of Office were Lisa Koegel, Patrice Hatcher, Lonney Jarnigin and Gary Cousins, all of whom were elected or re-elected in November.

Koegel is a newcomer to the board. She topped two other write-in candidates to win an open six-year term. No stranger to Carman- Ainsworth educational circles, Koegel and her husband, John, have been Flint Township residents for 25 years and have had two daughters who graduated from C-AHS and two sons now attending the high school. She is a former public school educator with 16 years of volunteer service at the elementary, middle, high school and district levels.

Hatcher and Jarnigin were re-elected to six-year terms and Cousins, who was appointed last year to fill a vacancy, was elected to a partial term that expires Dec. 31, 2018.

As a result of officer elections, Hatcher will again serve as board president for a one-year term. Joy Crane will serve as vice president; Gloria Nealy as secretary and James Johnson, as treasurer.

If there are no retirements or vacancies created otherwise, this board will remain the same until the November 2018 election. School board members are elected in the November general election of even-numbered years.

The school board meets at 6:30 p.m. on the first and third Tuesday of each month. Unless otherwise posted, meetings are held in the Conference Room of the Carman- Ainsworth Administration Building, G-3475 W. Court St.