C-A board swears in officers 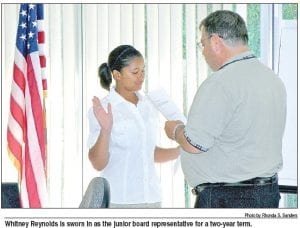 FLINT TWP. — Patrice Hatcher was elected president of the Carman- Ainsworth Board of Education and two members were sworn in at the annual organizational meeting Tuesday night.

Hatcher, who has served on the board seven years was previously vice president under out-going president Don Conway, who served the past two years. Hatcher’s term expires in 2013.

She said she looks forward to working with the community for student achievement.

Saunders, who was re-elected to a four-year term in May, was officially sworn in by Conway before he stepped down.

He also issued the oath of office to Whitney Reynolds who will serve as a student representative for a two year term. Reynolds also is vice president of the junior class. She joins senior student board representative Mishaal Khan who moved up from the junior position to replace graduating Erick Skaff.

In other organizational business, the board discussed and tentatively approved its meeting schedule for 2011-12. It will be finalized after some small changes, said Superintendent Bill Haley.

The school board will continue to hold its monthly meetings on the first and third Tuesday at 6:30 p.m. in the conference room of the CA administration building.

The board also approved continuation of district attorney designations with the firms of Thrun, Maatsch and Nordberg; Collins & Blaha and Hanba & Lazar.

Haley said that Thrun et al. do election work for the board while Collins & Blaha do all-purpose work and Hanba & Lazar exclusively handle worker’s compensation matters.

Also Taylor & Morgan of Flint was appointed as the district’s C.P.A. responsible for the audit presentation in November.

The board approved representatives to the Genesee County School Board and also approved appointments to CA board committees.

Some minor changes to the 2011- 2012 student Code of Conduct also was approved. A committee that included parents and administrators met last week to review and revise the code of conduct, Haley said.

One change moved the tardy policy to the building level. Haley said detailed tardy policies are currently included in all building handbooks. To eliminate confusion and clutter, the policies were taken out of the code of conduct.