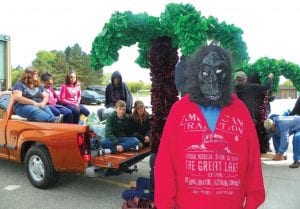 As a warm-up for the Homecoming parade followed by the big game on Friday night at 7 p.m. against Flint Northwestern, students participated in Spirit Week by wearing weird get-ups on Monday for Kooky Clothes Day, dressing like the nerdy TV character Steve Urkel on Tuesday, wearing their favorite Video Game T-shirt on Wednesday or dressing like their favorite video character and donning clothing styles from their favorite decade for Old School Day on Thursday. Friday was the day to break out the class T-shirts or other C-A gear.

This year’s Homecoming theme is Old School Video Games. Each class chose one for their parade float design. Freshmen will be sending out a gorilla and palm trees on their Donkey Kong float; sophomores will roll out a Tetris grid; the Juniors have recreated the jaws of Pac Man and seniors will feature the animated antics of Super Mario Brothers.

Susan Carter. a high school counselor, is the Grand Marshall for the Homecoming parade which is scheduled to start at 4:45 p.m. Friday and will follow its usual route from South Baptist Church on Van Slyke to the CA middle school on Maple Road for the homecoming game.

Half-time will feature the crowning of this year’s Homecoming King and Queen.

In Homecoming balloting a week ago, the student body also chose a prince and princess for each grade level to serve on the Homecoming Court.

The week of celebration will wrap up Saturday night with the Homecoming Dance from Homecoming 8-10:30 p.m. at the high school.