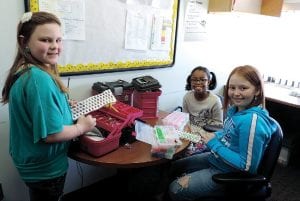 Emma Bell, Kelcee Ballard and Madison Bright, fourth-graders at Randels Elementary School, are making and selling their Rainbow Loom jewelry to help a schoolmate whose home was recently destroyed in a fire.

FLINT TWP. — Toting around their little cases of jewelry-making supplies, three fourth-grade girls at Randels Elementary School are spending their free time to help schoolmate Nick, a fifth-grader who lost his mother and his home in a Feb. 26 fire on Lask Drive.

So far Emma Bell, Madison Bright and Kelcee Ballard have raised about $260 selling colorful hand-woven necklaces, bracelets and rings made on their Rainbow Looms, a popular children’s craft kit.

Necklaces are selling out as fast as they can make them and also anything done in the Detroit Tigers blue and orange colors, Madison said.

Emma said her mother came up with the fundraising idea.

The girls sell their wares during lunch time and during other fundraising events.

“We’re having fun and doing something good,’’ Kelcee said.

The girls are just one example of the outpouring of school and community support for Nick and his family who lost the entire contents of their home in the fire. He and his 2-year-old brother were hospitalized with severe smoke inhalation but are improving.

Nick is now off the ventilator and able to speak and word is that his little brother might be released soon, said Bonnie Haffajee, Randels principal.

So far, efforts spearheaded by Carman-Ainsworth students and staff has raised about $2,400, she said.

In addition the the money raised by the jewelry makers, Rankin Elementary School hosted a pajama day, Carman- Ainsworth High School held a Hat Day and the middle school raised about $800 at a Hat Day and another fundraiser.

The funds are being deposited in an account set up for the family so they have immediate access, Haffajee said.

The school is also collecting clothing and other necessities for the family. Nick, who is quite an artist and loves to draw comics, also asked for Legos and drawing supplies which will be provided, Haffajee said.

Besides selling Root-beer floats, Randels planned to host a benefit pasta dinner from 5:30 -7:30 p.m. on Thursday March 13. Randels staff and supporters are running the event but all the food was supplied by local businesses including Sorrento’s on Flushing Road, Italian Gardens, Salvatore Scallopini and the Olive Garden restaurants on Miller Road, Ruggero’s restaurant and Sam’s Club and Kroger’s on Corunna Road.

Haffajee said she did not know for sure but hoped Nick would be well enough to return to school after spring break next month.