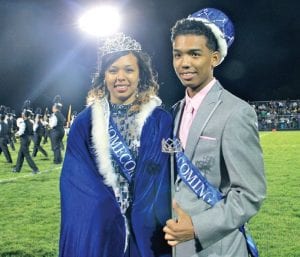 Diamond Scales and Lonnie BeCoats captured the crowns of Homecoming Queen and King during halftime activities at the football game last Friday.

Diamond is a varsity cheerleader and was awarded Most Spirited for two consecutive years. She also is a member of the track and field team for pole-vaulting, is involved in gymnastics and played in the powder puff football game, She is a member of the African American Student Association, the ACT 21 Club, and participated in the CAHS fashion show. She is first aid and HIPAA certified, is a long-time member of the Honor Roll, and received a Saginaw Valley all-Academic award. She plans to attend college on a pre-med track. She is the daughter of Noelle Dare and Jason Scales

Lonnie is involved in HOSA and broadcasting and has participated in the CAHS blood drive. He is CPR, HIPAA and first-aid certified, and a member of the Honor Roll. In his free time he enjoys golfing, reading, dancing and spending time with his friends. Lonnie plans to study dentistry to become an orthodontist.

Other court members were:

Last year’s King and Queen – Frederick Van Duyne and Katlyn Koegel also were on hand to take their final bows. She is currently attending Hope College in Holland and he will be attending Yale University in the fall of 2015.