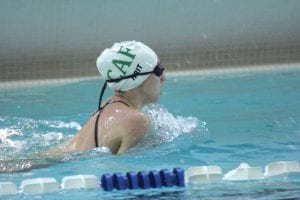 This could be the last year for the Carman-Ainsworth/Flushing swim and dive teams, as the coops will have to be dissolved next year with Flushing voted into the Metro League on Tuesday starting with the 2014-15 school year.

FLINT — It’s official. Flushing has been voted into the Flint Metro League after the league principals voted at their meeting Tuesday morning. Pending Flushing Board of Education approval, Flushing, with an enrollment of 1,277, becomes the eighth Metro League member starting with the 2014-15 season.

“This was a decision that was made by looking at all of the data. We took action to vote Flushing into the FML based on their presentations, facilities and offerings. I feel we made a great choice in selecting Flushing,” said Kearsley High School Principal and League President Brian Wiskur Tuesday.

Metro League Secretary and Kearsley Athletic Director Paul Gaudard noted that the vote was “not unanimous, but nearly unanimous”. He added, “The enrollment numbers tipped the scales just slightly. They will come in as the largest school, but not nearly as significant as if it would have been Carman-Ainsworth. Flushing is just a great fit, geographically close travel for all the Flint Metro schools and they have good facilities, good academics and we felt just a good fit to the league.”

Formerly a nine-team league, the Metro opted to scale down to eight member schools beginning with the 2014-15 school year. The opening in the league and subsequent realignment comes about after the June decision that Lapeer East and Lapeer West will consolidate into one high school starting in the fall 2014. With predicted enrollment numbers of 1,600, or close to it, that meant that Lapeer was going to be considered too big for the league’s liking with its current largest member school Swartz Creek with an enrollment of 1,277.

“We were obviously happy with the Saginaw Valley League, but as a result of Lapeer merging it left a void in the Metro and at the time the Metro had sent out notice that any school interested would have to send a letter of interest,” said Flushing Athletic Director Paul Brieger. “In this day and age, as a school district, you have to look at the budgets and the best interest of the students. First, the schools in the Metro are in close proximity to Flushing. I think the furthest school is 34 miles away while the furthest SVL-North school is 79 miles away.”

“Transportation is a factor,” Brieger added. “Secondly, it was an opportunity to develop strong rivalries because they are closer and by being closer it reduces the amount of time fans and parents have to travel to watch their child play. Flushing has always supported our athletics very well and this makes it easier for them and hopefully increases attendance. Lastly, the makeup of the Metro is very similar to Flushing where they carry freshmen through varsity athletics. In the past, I’ve had to find another school to take on our freshmen and JV teams because the school scheduled against the varsity did not field sub-varsity teams. As a result of this merger, scheduling wise, it will be great for freshmen through varsity athletics.”

Carman-Ainsworth athletic director Bob Root was clearly disappointed — and frustrated — with the decision.

“We’re disappointed,” Root said Tuesday afternoon. “I still don’t understand why we can’t all come together in this area instead of picking and choosing leaving others out instead of coming together to get everyone back under a community league for competitive purposes, travel and everything else involved. Now, we’re right back to five teams again and with our co-ops, possibly cannot offer those sports now. It’s just disappointing.”

Root added, “What I’m hearing is that we were looked at as being too big. Our February count was 1,347. There is no competitive advantage to having 200 or more kids than any other school because it’s still all about quality coaches and quality programs.

Linden’s a perfect example for the Metro League, because Linden is one of the smaller member programs, but they have one of the best football programs. So, the numbers just really are not a key thing that anyone should be looking at. I just wish we could all come together as a community league. It’s just not a good thing from my perspective to have all these community schools playing in all these different leagues.”

Root’s most important message for his community is simple: “We’ll come out of it fine and we will always do what’s best for our kids.”

To his point, though, the four former Big Nine schools—Davison, Flint Powers, Flushing and Carman- Ainsworth—had all applied to fill in the void, but the Metro League decided instead to accept just one and trim down to eight. It accepted application bids from Flushing and Carman-Ainsworth.

“Part of the league stipulations is that if you want to compete for a league championship you need to co-op with schools in the conference,” continued Brieger. “Obviously, it’s still premature. We’re going to explore if we have enough to do a standalone in those sports and if not, we’ll have to reach out to one of the other schools in the league.”

Gaudard knows all too well about dissolving co-ops. He had to go through the process when Kearsley left the Big Nine.

“We went through that when we had to dissolve our co-ops with Davison when we both belonged to the Big Nine, so we understand all that,” Gaudard explained. “We’ve got a year before all this happens, so that gives both the schools time to assess their options and move forward.”

As far as the Valley, it’s wait and see.

“Well, for this year, we’re going to stay the same because we’re not going to lose either school for the coming year,” said SVL president and Saginaw Heritage athletic director Pete Ryan. “For next year, we’ll have to re-evaluate divisional alignment and determine whether or not we’ll stay with north and south divisions or if we’ll look at some other options. So, we’ll just have to take a look at that during the course of this year.”