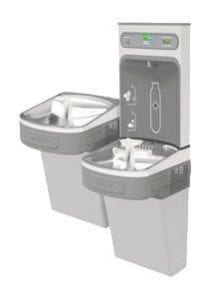 New bottle filling water fountains will be installed at Dye Elementary school to encourage students to drink water instead of sugary beverages.

FLINT TWP. — Carman- Ainsworth’s Dye Elementary is among 23 schools in the state that will soon have two new water fountains/bottle filling stations thanks to a grant from the Delta Dental Foundation (DDF), according to a press release.

Dye was among the winners of the DDF’s $100,000 Rethink Your Drink: Water’s Cool at School program, designed to encourage children to drink more water during the school day. Dye and all selected schools will have old drinking fountains replaced with new Elkay water fountain/bottle filling stations installed by Royal Oak-based Balfrey & Johnston.

As part of their prize package, Dye Elementary students and staff also will receive reusable water bottles as well as funding to design and implement a campaign to encourage students to drink more water during the school day.

Okemos Public Montessori at Central was the first school in the state to pilot the new program and in the first month of school saved more than 2,200 empty water bottles from going into a landfill and increased water consumption among the student body.

“The Delta Dental Foundation is pleased to fund this program,” said Teri Battaglieri, DDF director. “Water is critical to maintaining good oral health and when children choose water over sugar-sweetened beverages, they can reduce the incidents of tooth decay, the most common chronic childhood illness in the U.S.”

“More than 50 percent of children and teens in the U.S. are not properly hydrated during the school day which can, among other things, impact cognitive function and energy levels. And when kids choose to quench their thirst with sugar-sweetened beverages such as soda pop, juice and sports drinks, this can have adverse effects on their oral and overall health,” said Battaglieri.

“One 20-ounce soda pop contains nearly as much sugar as three chocolate candy bars and drinking soda pop nearly doubles the risk of cavities in children. We want to encourage students of all ages to rethink their drink and choose water at school because it’s good for their bodies, brains and teeth.”

The Delta Dental Foundation is a nonprofit, charitable organization established in 1980, which serves as the philanthropic arm of Delta Dental of Michigan, Ohio, Indianan, and North Carolina. The foundation’s goals are to support education and research for the advancement of dental science, and to promote the oral health of the public through education and service activities, particularly for those with special needs. — Rhonda Sanders