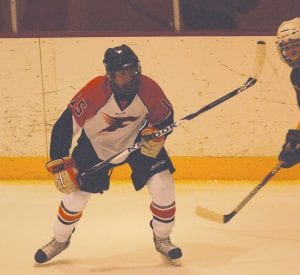 Carman-AInsworth/Flushing’s Mickey Montpas returns to help lead the Raiders in 2011/2012.

FLUSHING— The Flushing/Carman- Ainsworth co-op hockey team is reloaded and getting ready for the upcoming season. Although they skate as the Flushing Raiders, there is some strong Cavalier influence on the roster. Regardless, the two schools combine to make a competitive program.

The Raiders lost their top player from last season, team MVP Mathew Leland, to graduation. However, there will be several veterans returning to the lineup, including Jordy Makranyi, Mickey Montpas, Kevin Wilson, and Andrew Sanborn, all of which are juniors.

The Raiders have also picked up four newcomers that they expect to contribute to the team’s production. Senior defenseman Nick Brazeal comes over to the team after playing for the 95 Flint Phantoms. There is also the addition of freshman forward Gavin Williams, as well as sophomore defenseman Garrett Schafsnitz, who previously played for the Lapeer Storm. Adding senior goalie Chad Bundy should help solidify the Raiders between the pipes.

Bundy will be competing with senior Casey Bradshaw for the starting job, as Bradshaw is the returning starter. The Raiders finished 11-13-1 overall last season, and were eliminated in the first round of the playoffs by Bay County.

“ We are very excited for this year’s team,” said coach Jon Jepson. “I feel we have a great chance to really catch some people by surprise. Offensively, we have two lines that should put up some solid numbers, and a third line that will really create some energy for the rest of the team.”

“Defensively we have five seniors that will lead by example and tighten up our defensive zone,” continued Jepson. “Goaltending will be the hardest decision I have to make all year. Casey Bradshaw and Chad Bundy both have the ability to be starters, and will be pushing each other all year long.”

The Raiders will open their season on Saturday against Goodrich at 7 p.m. at Flint Iceland Arenas.