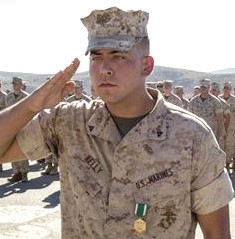 FLINT TWP. — As a Marine and a father, Ramon Gatica could not be more proud of his son Lance Cpl. Anthony Cole Kelly, 20, who was recently awarded a Navy and Marine Corps Commendation medal for an act of heroism. Based at Camp Pendleton in California, Kelly is a 2012 Carman-Ainsworth graduate serving his third year of a fiveyear enlistment in the Marine Corps.

His job as a Military Police Officer led to an incident on July 15 in which he is credited for saving a woman’s life.

In his own words in a telephone interview, Kelly recalled the night he was on patrol alone when the 911 call came in from the woman’s husband who said she was unconscious and not breathing. It happened during shift change when there is only person on duty in each designated zone, he said.

Knowing the exact location, he arrived in about “40 seconds” to find the woman’s husband attempting to give CPR. Kelly took over and did CPR for about six or seven minutes until the ambulance and fire squad arrived.

“After I got done, I felt like I had run five miles,’’ Kelly said.

The woman, who had overdosed, had to be shocked twice with a defibrillator to restore her pulse, he said.

“I kind of was still in a daze because I did not want her to pass away in my hand,’’ he said.

Once stabilized, the woman was transported to the hospital and has recovered. Kelly never met her but said he stopped by the hospital later to make sure she was OK and her husband thanked him.

The fire chief also praised Kelly for “good work” that saved a life.

Not long after, Kelly began hearing rumors about receiving recognition for his effort.