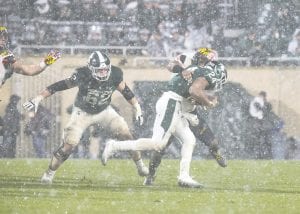 SEATTLE – Gerald Holmes, an undrafted free agent rookie realized his childhood dream of becoming an NFL player when he signed with the Seattle Seahawks last Wednesday after we had gone to press. Holmes, 23, a graduate of Carman-Ainsworth and Michigan State, is a 6-foot-1, 231 pound running back who played in 11 games for the Spartans last season, racking up 287 yards on 79 carries with 80 receiving yards. Holmes had a career best for the Spartans with 540 yards, eight touchdowns and 110 carries in 2015.

Holmes took part in the Indianapolis Colts rookie minicamp in May, but never signed with the club. After signing with Seattle on Wednesday, Holmes tweeted out a one-word response: “opportunity.”