C-A grad is a DARK HORSE 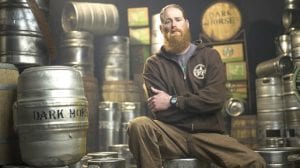 Bryan Wiggs, a Carman-Ainsworth graduate, is one of the cast members of “Dark Horse Nation,” a new reality TV series about brewing beer, seen on the History Channel.

Bryan Wiggs one of the featured characters on the weekly show is a 1998 Carman-Ainsworth High School graduate. He also is the son of Ann Saunders, a C-A school board member.

The show, which began airing on July 29, follows the daily activities of the Dark Horse Brewing Co. based in Marshall, Michigan. Wiggs is the resident brew master, which means, “His job is to make the beer.” Saunders said.

In a biography posted on the show’s website, Wiggs is described as “the chemist tasked with creating more than 80 limited release brews each year. …(With) an endless surplus of creativity and brewing ingenuity, he’s the only brew master that Aaron has ever wanted on his team and a big reason behind the cult following for Dark Horse beer.”

Aaron Morse is the owner of Dark Horse Brewing Co. The show follows Morse, Wiggs and other heavily-bearded members of the ensemble cast described by the History Channel promo as “ a group of life-long friends living out their version of the American dream. Led by rebel entrepreneur and fearless visionary, Aaron Morse, Dark Horse is a thriving business set amongst a rural paradise. Morse and his team have been making a name for themselves since 1997, when Dark Horse started bottling their unique line of craft beers. Now distributed in 12 states, the Dark Horse crew is determined to turn their business into a household name. Its die-hard fan base even has its own nickname: Dark Horse Nation.

However, DARK HORSE NATION is not only about crafting great beer, it’s a way of life. Their recipe for success is as much about experimentation and trouble shooting, as it is self-taught skill and determination. Every week, there’s some new project, from creating outlandish inventions to building additions to their ever-growing compound. Around here, everything is done by hand, the old-fashioned way, or as they like to put it, “The Dark Horse Way.”

Saunders encouraged fellow C-A board members to remember to watch the show, which originally was shown at 10 p.m. on Tuesday nights, after school board meetings. But after the sixth of 12 filmed episodes aired on Aug. 11, the program went on hiatus for about two weeks while the History Channel finds a new time slot.

The History Channel is looking for a new day and time to run the second half of the season, Morse posted on his Facebook page on Aug. 19. He thanked viewers for watching and encouraged them to spread the word about the show, which launched “with very little notice or promotional marketing,”

“In TV land, it’s all about numbers and if we can all band together and get as many folks watching Dark Horse Nation for the second half of the season, we can show that when the little guys back each other, we can make some NOISE!” Morse wrote.

For the new air date and other information about the show, he asked followers to share this link and stay tuned to his Facebook page at: www.facebook.com/DarkHorseBrewing.

He also asked them to spread the word about the show and invite others to catch up on the first six episodes online by visiting www.history.com/shows/darkhorse nation.

1. “Hops to It” — Tired of seeing thousands of dollars literally go down the drain, Aaron dreams up a new brewing device that he hopes will make the brewery more profitable. After years of being the odd man out, Wiggs asks Chappy to give him shooting lessons on the Dark Horse gun range in an effort to be invited on the guy’s hunting trips.

2. “Shackin’ Up” — Aaron designs a tricked out, mobile ice shanty on tank treads for the guys to use while fishing during the brutal Michigan winter. When “Helga,” the old bottling machine, breaks down, the entire brewery grinds to a halt—forcing Cabe to make a difficult repair to get Dark Horse back up and running.

3. “Bacon Beer” — Aaron challenges Wiggs to make a bacon beer to be sold at the brewery’s 4 Elf Party, their largest event of the year.

4. “Ice Kart Truckers” — The guys complete construction on the Dark Horse Go-Kart track but a massive snowstorm hits before they can turn laps on it forcing them to figure out a way to race on the ice. Aaron and Wiggs go head to head in a brewing competition.

5. “Full Tanks Ahead!” — With the demand for their beer increasing, the Dark Horse crew boosts their output by brewing 24 hours a day, which pushes their equipment to the breaking point. Aaron challenges the guys to mill their own lumber from trees on their property and rebuild the front of the brewery.

6. “Beers on Parade”— Dark Horse decides to enter their town’s annual Christmas parade float contest, but the strict rules for the event don’t sit well with the guys as they struggle to make their vision for their creation into a reality.