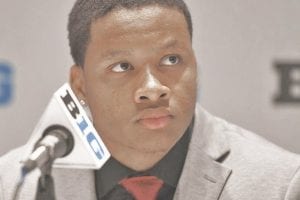 EAST LANSING – Gerald Holmes is embracing a leadership role on the Michigan State football team this season. The Carman-Ainsworth grad and MSU senior running back is teaming up with Chris Frey and Brian Allen to reset the culture in the locker room that was part of MSU’s disappointing 3-9 season last year.

Holmes spoke at last Monday’s Big Ten Media Day in Chicago and told the press corps that he has inserted himself into a leadership role. Holmes said that’s something he is comfortable doing.

“I’ve been through everything so I can relate to them (the new players) when they are going through the same things this year,” said Holmes. “The focus is to keep the good in front of you.”

Holmes said the new narrative this year all comes from the heart and being a more verbal leader. He’s already established himself as a leader on the field gaining 4.7 yards per touch last season as part of a trio of running backs.

When asked about getting the team chemistry back, Holmes was direct about his role.

“Stay consistent,” Holmes said. “Grab a group of people like you. The Chris Freys, Brian Allens, a few others not here that are like you. You get them guys together and get everyone on the same page and others will follow suit.”

Holmes said he feels like a new Spartan era is coming up and the team is working toward getting back to its winning tradition.

Holmes said he had a good role model in locker partner Keith Mumphrey when he first came to the program. He said Mumphrey gave him great guidance about God having a better plan and just staying positive.

When asked where his leadership drive comes from, Holmes referenced his dad.

“It comes from my dad. My dad is a great leader so I just took on those traits,” Holmes said.

Holmes took it upon himself this season to bring back the player-only meetings to put the team unity back together. He said there was a racial divide in the locker room last season. He, Frey and Allen are leading by example and attempting to repair that fracture.

“We don’t see that divide this year,” Holmes stressed. He detailed how society or how kids were raised shaped some of the negativity and racial issues last year. “The emphasis is on accountability from all the players and getting everyone on the same page as far as teamwork ethics.”