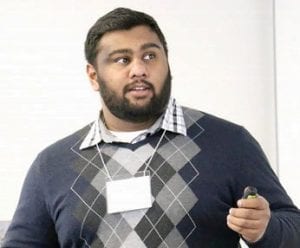 FLINT TWP. — Four years ago, Kiran Vekaria was one of the Top Ten students who walked the stage at Perani Arena to receive his high school diploma from Carman- Ainsworth High School. Graduating fourth in his class with a 3.962 g.p.a., he also was one of five 2012 graduates inducted into C-A’s prestigious Academic Hall of Fame, a permanent showcase for the district’s highest achievers.

Vekaria’s thesis — titled “Ising Lattice Gas Model of Clathrin-Coated Pit Nucleation” —studied the dynamics of clathrin mediated endocytosis (CME) to give a greater understanding of factors that influence the process. Applications of his research as it develops could include prevention of cellular infections or targeted uptake of medicines.

The thesis was selected for the award by a committee made up of a multidisciplinary group of faculty.

“I was very excited and in a little bit of disbelief when I found out I’d received the award,” Vekaria said. “Mostly, I was very happy that the last year and a half work has been rewarded.”

Many Kettering students choose to do professional practice theses, tied to their experience with their co-op employers. Vekaria, is among a growing number of students who are choosing the research thesis option, which should prepare him well as he plans to pursue a master’s degree in Optical Science from the University of Arizona and, eventually, a Ph.D.

“Kiran is an extremely hard worker and was very dedicated and organized,’” said Dr. Gillian Ryan, Department of Physics faculty member and Vekaria’s advisor. “This is still an ongoing project, and in addition to his work, help sheets and other materials he created will help current and future students who pick up on what he has started,.”