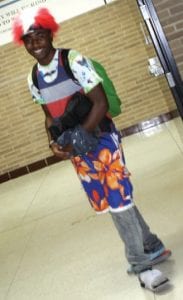 Dressing up for Kooky Clothes Day on Monday was part of the fun for Homecoming Week.

A Homecoming Queen and King will be crowned at game half-time. Vying for the queen’s crown are Alexus Colby, Kali Jackson, Katlyn Koegel, Maisha Robertson and Kayla Tigner.

A Prince and Princess for the lower grades have been chosen. They are juniors, Taylor Brooks and Jimmy Shelton; sophomores, Mikaila Garrison and Jalen Lewis and freshmen, Jade McCloud and Keith Franklin.

In keeping with tradition, a theme chosen for this year’s Homecoming Parade is Mt. Olympus for which each class chose to decorate a float with a Greek God.

Seniors chose Zeus, Father of the Gods; Juniors will have Poseidon, God of the Sea; Sophomores chose Ares, the God of War and Freshmen chose Apollo, the God of Music. 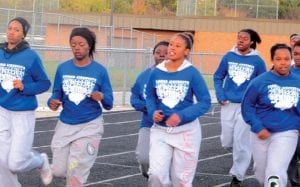 The parade starts at 4:30 p.m. on the usual route south on Van Slyke, between Bristol and Maple roads and east on Maple to the Middle School. Access to both roads will be closed by 4:15 p.m. and reopen about 5:30 p.m.

Students dressed up all week according to themes including Kooky Clothes on Monday, Twin Day on Tuesday, Toga day on Wednesday Crazy Sweater Day on Thursday and Spirit Day on Friday when they wore school colors and gear.

Homecoming Week wraps up Saturday night with a Party at the Parthenon theme for the Homecoming Dance at C-A high school. 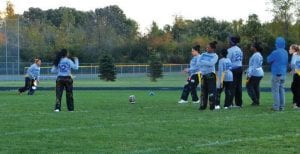 Seniors limber up in pre-game warm-up before taking on junior girls in the annual Powderpuff football game, one of many Homecoming Activities this week.