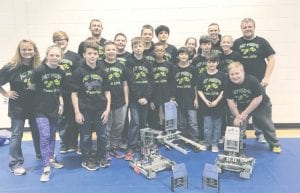 They came out on top again on Saturday, Jan. 28, at the Nissan VEX Starstruck Qualifier held at the Nissan Technical Center North America in Farmington Hills.

Presented by the Robotics Education & Competition Foundation, VEX is a fast-growing middle school and high school robotics program with more than 16,000 teams from 40 countries participating in more than 1,350 tournaments worldwide. Each year, an engineering chal- lenge is presented in the form of a game. For the 2016-17 season, participants in the VEX Robotics Competition are playing a game called Starstruck.

The game is played on a 12’x12’ square field divided into sides by a fence. Two alliances — one “red” and one “blue” — compete in two-minute matches. Teams and their robots score point by launching star and cube shapes into zones on their opponents’ side of the playing field. They also can score additional points by hanging their robot from a bar at the end of play.

C-A’s two VEX teams competed among 32 middle school teams at the January 21 tournament. After the qualification matches both Carman-Ainsworth teams were paired together as the number 1 alliance team as they went into the elimination brackets competing against 8 different alliance teams, according to Leanne Welch, team coach/mentor.

The Carman-Ainsworth alliance came out victorious, defeating a Cranbrook alliance in the finals. They won the Tournament Champions Award.

One of the teams also won the Excellence Award, based on an interview with judges and the Engineering notebook they compiled about their team and design process.

The other team won the Skills Challenge Award based on their programming skills and robot driving skills.

Both teams qualified for the state tournament to be held on Sunday, February 19 at Michigan State University in East Lansing. The 2017 VEX Worlds -Robotics Competition Middle School Division will take place April 19-22 at the Kentucky Exposition Center in Louisville.

Already qualified for the state competition, the two C-A teams again joined forces as the #1 alliance in an 8 team elimination bracket at the January 28 tournament, which started out with 44 teams, most of them from high school.

Working together, the C-A teams again won every match in the elimination rounds, capturing the Champions Award.

One of the teams won the Middle School Excellence Award (the highest award granted to a well-rounded team based on documentation in an engineering notebook).

The other team won the overall Excellence Award using the same criteria as above but this time amongst all teams (middle and high school).