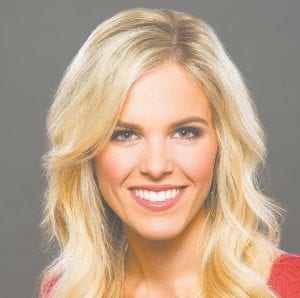 Heather Kendrick, Miss Michigan 2017, will be a guest performer at the C-A 20th Annual All District Band and Orchestra Concert in May.

FLINT TWP. — Heather Kendrick, Miss Michigan 2017, will be a guest performer at the Carman-Ainsworth 20th Annual All District Band and Orchestra Concert.

Kendrick, of Marysville, is a violinist and University of Michigan graduate with degrees in Music Education, Violin Performance, and the study of

Organizations. As an arts professional, she works with her platform “Keeping the Arts in

Education: Advocating STEAM” daily and is Program Director for the M-Prize

Competition, the world’s largest competition for chamber music, and Operations

Director for the Cambridge International String Academy at the University of Cambridge,

The concert, also featuring returning alumni, will be held at 7 p.m. on May 7 in the C-A high school gym. Kendrick will perform all evening with the orchestra ensembles, said Suzanne Miller, K-12 music coordinator and educator.

C-A orchestra also is celebrating its 20th year with the addition of the fifth-grade string class.

Special thanks go to the Classics for Kids Foundation, which through a generous matching grant made it possible to obtain instruments for C-A’s new fifth grade string program, Miller said.

She also announced the formation of the Kyle Eileen Hart/Marion Dale Lage Endowed Music Memorial Fund. This fund has been established under the umbrella of the Carman-Ainsworth Education Foundation.

It incorporates the Kyle Eileen Hart Music Memorial Fund, established in 1999 in memory of Kyle Hart, a Carman- Ainsworth fifth grade baritone student, who died unexpectedly. The Fund was created to provide instruments typically provided by families: flutes, clarinets, trumpets, trombones, violins and violas. The Fund ensured that all children, regardless of the family’s financial situation, were able to participate in instrumental music.

Marion Dale Lage was a pillar of the instrumental music programs at Carman- Ainsworth and never missed a concert in 19 years before her passing at age 89 in February 2017. Lage never “officially” taught instrumental music but was actively involved in the arts, playing the piano and organ, and instilled her love of music in her five children who all played instruments. She advocated that music programs played an essential role in the development of social skills and emotional awareness in children.

The Hart/Lage Endowed Music Fund is a permanently endowed fund to ensure that generations of Carman-Ainsworth children have the opportunity to take part in the instrumental music family.

Donations are welcomed and are tax deductible. Checks or money orders can be made out to the “CAEF” (note in the memo line – Hart/Lage Endowed Music Fund) and mailed to CAEF, G-3475 W. Court St., Flint MI 48532.

Interest earned from the fund each year will be used to purchase necessary instruments. Purchased instruments will become part of the C-A instrument inventory and will be loaned to students as needed.