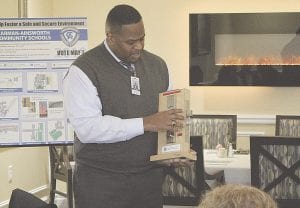 Carman-Ainsworth Superintendent Eddie Kindle explains how quick action locks work. If a one millage increase to the sinking fund is approved by voter, May 7, the district plans to put 300 of these locks in Carman-Ainsworth schools at a cost of $500 per lock. Photo by Gary Gould

FLINT TWP. — Carman-Ainsworth will take two millage requests to the voters May 7, one to increase the millage collected for the district’s sinking fund and the other a measure an override of the Headlee Amendment.

Superintendent Eddie Kindle and Assistant Superintendent Russ Parks took the district’s case to the West Flint Business Association, March 21, where they explained what would be on the ballot and why.

Kindle explained security concerns are the reason for the need for a sinking fund increase, citing the district’s plans to install more than 300 quick action locks on classrooms throughout Carman-Ainsworth’s school buildings.

“It is unfortunate we have to have a conversation with students K-12 about the importance of being prepared as a result of active shooters, or incidents that happen to the schools where people want to cause harm to the students, staff or community members,” said Kindle. “One of the things we do if alerted to intruder in a building is we go into lockdown, requiring us to secure the doors.”

In addition to locking the doors, Kindle said policy requires classrooms to barricade in place, which means moving furniture against doors. However, he said, the application of this strategy is not universal because of the locking system in the district’s buildings. Officials have researched how to get a universal locking system just to provide an enhancement to the door itself.

Kindle said they found the company Guardian SSI has come up with a quick action lock. Most important aspect of a quick action lock, he said, is anyone can execute the lock, which is as simple as pressing a red button. This would provide we an additional lock for each door with a deadbolt.

Furthermore, Kindle said if they have to evacuate, opening the door is as quick as reacting the door handle.

“Just turn the handle and go about your way,” he said “There are all types of devices coming out. We don’t want our schools not to look inviting, but we want our schools to be safe. So, we feel like this is one of the best products on the market.”

Potential projects due to an increase in the sinking fund also include repairs to deteriorating parking lots and installation of more effective and efficient exterior lighting.

Voters approved the current 18-mill operating millage and 0.5-mill sinking fund in 2004 and renewed them in 2013. However, since 2004, officials said revenue has decreased by nearly 30 percent; that means the district receives $141,000 less today than it did in 2004.

“That’s low tier for the 21 districts in Genesee County,” said Kindle. “So, we are asking for an increase in the sinking fund to put us near the top – so we can do upgrades, renovations and repairs. That’s all sinking fund money can be used for. Can’t be used for salary or benefits or things of that.”

“I go back to the term investment again, that’s why we are asking for that increase to our sinking fund millage,” he said.

Past projects the district has used its sinking fund for includes boilers, roofs and resurfacing the gymnasium.

“It’s not like the money doesn’t go to enhance our schools,” said Kindle. “This time around it will be put toward the security of our schools.”

Parks said voters the current 18-mill operating millage, but the district currently does not receive the full amount because the millage was reduced when annual growth on existing property was greater than the rate of inflation, due to the Headlee Override Proposition.

A Headlee override is a vote to return the millage to the 18 mills originally authorized by the community. Restoring the levy to the full 18 mills could generate an additional $45,000 a year, Parks said.

When Michigan voters approve Proposal A in 1994, it established a statutory rate of 18 mills for non-homestead, that goes directly to the schools. This is assessed only on businesses, rental properties and vacation homes.

With the May 7 election, the district is proposing the millage be set at 20 mills – which gives it the rolled back amount of 17.8686 mills, plus 2.1314 mills to equal 20 mills. This way, when a rollback happens it comes off the 20 mills, then Proposal A sets the millage at the 18 mill cap — making it so Carman- Ainsworth schools keeps the $45,000 annually it would lose due to the Headlee Amendment.

“When the inflation rate goes up, it means the economy is getting better,” said Parks. “We could have another Headlee override next year, which would mean the loss of another $45,000- $50,000. Obviously, if we keep doing that, that’s some significant dollars.”

Parks said by asking to go above 18 mills, the district won’t have to keep going back to the people for a vote to override the Headless Amendment, to ask for a vote.