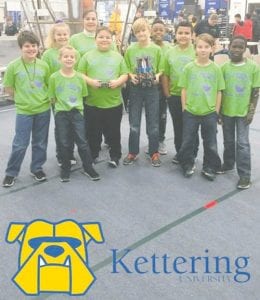 This year’s game — VEX IQ Challenge Ringmaster – is played on a 4’x8’ rectangular field. Two robots compete as an alliance in a Teamwork Challenge in 60-second long matches, working collaboratively to score points. Teams also compete in two additional challenges; The Robot Skills Challenge, where one robot takes the field to score as many points as possible under driver control; and the Programming Skills Challenge, where one robot scores as many points as possible autonomously, without driver input. The object of the game is to attain the highest score by Scoring Colored Rings on the Floor Goal and on Posts, by having Uniform Posts, by Emptying Starting Pegs, and by Releasing the Bonus Tray.