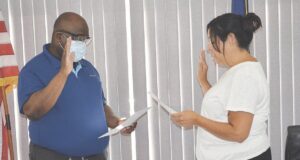 Waymond Beavers taking the oath of office at the July 27 special board meeting. Photo by Ben Gagnon

Beavers, who formerly served as an appointed trustee on the CACS Board of Education from August 2019 to December 2020, was selected unanimously by the school board last week. He will fill a partial term that expires on Dec. 31, 2022.

Beavers attempted to retain his original seat on the school board in the 2020 general election but finished third behind Miller and incumbent Trustee James Johnson. He said he’s excited to serve Carman Ainsworth once again as a trustee.

“I love the district and what we’ve accomplished,” he said. “I’m definitely looking forward to the opportunity of working with the board again.”

La Cracha Handy, a health unit coordinator at Hurley Medical Center, also applied for the vacant school board position. She and Beavers were both interviewed by the Carman Ainsworth School Board at a special meeting held on July 27.

Beavers has two children: a daughter who graduated from the district and now attends Michigan State University, and a son who’s currently a senior at Carman Ainsworth. He said that it’s imperative for the district to continue to prepare students for college and give staff the resources they need to succeed.

“As a school board, we have to make sure that our children are well taken care of and that they get the most opportunities to have the best education possible,” he said. “We need make sure our kids are safe, our staff is provided for and our kids have the right tools to move forward.”

Beavers, a 30-year employee and longtime engineer at General Motors, said that he also wants to help connect students with career programs and be an inspiration for members of the student body—particularly young Black male students.

“A passion for me is letting our young men know that there’s a lot more out there than some of the things they’re experiencing,” he said. “We’ve got to do better with them because they don’t have enough of those positive examples out there.”