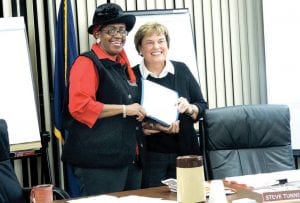 C-A board president reads a resolution in honor of long-term board member Peggy Anderson, who was attending her final board meeting after nearly 22 years.

FLINT TWP. — Peggy Anderson attended her last meeting as a member of the Carman-Ainsworth school board last week and received a warm sendoff with cake, a resolution and much praise.

When Anderson took her seat in July 1993, Bill Clinton was serving his first term, John Paul II was the Pope, Michael Jordan was a Chicago Bull, the final episode of “Cheers” had recently aired on TV and the soundtrack from Whitney Houston’s “The Bodyguard” was topping the charts and winning awards.

Now Anderson is stepping down after 21 ½ years of service where she is acknowledged by many as a mentor and leader.

Superintendent Steve Tunnicliff said Anderson took office one month after he graduated from high school. Based on her record of near perfect attendance, he estimated that she attended 473 regular board meetings, not counting committee meetings and other school improvement activities.

Serving under five different superintendents, Anderson held every position on the board including president, secretary and treasurer, and some of them more than once.

“I have witnessed, and I am sure all who know her can attest, Peggy has used the “what if it were my child or grandchild test” when making important decisions for our school district.

“Peggy has taught us all how to govern with compassion and to serve with dignity and grace. I will always be mindful of her commitment and service to our district and her genuine concern for me and my family,’’ he said.

Board President Gloria Nealy presented a board resolution to Anderson wishing her the best in her new ventures and extending “utmost appreciation for the work that she has done to make education activities an enriching and exciting experience for the students of our district.”

In her remarks, Anderson said a lot has changed in her tenure and for the better.

When she joined the board, district officials were debating whether it was worth spending the money to bring computers into the classrooms.

“Our poverty rate has gone up but our mission has never changed,’’ she said. “When I think over the alternative programs we have had, we have never chased the newest thing but we have always done what I call the right thing,’’ she said.

Anderson said she would miss serving on the board but is content to know that she is leaving the district in great shape and in good hands.

“When I joined the board, there was a lot of conflict,’’ she acknowledged. “We don’t have that now.”

“We are in good shape. Our kids that need us are going to have us. It couldn’t be better,” she said.