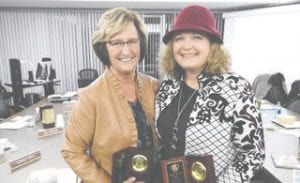 Patrice Hatcher (right) and Joy Crane, received special recognition at their farewell C-A board meeting. Both have resigned.

Patrice Hatcher and Joy Crane, who most recently served as board president and vice president, respectively, have submitted formal letters of resignation, effective Jan. 19.

Resumes’ and letters of interest in filling the vacancies are due by 4 p.m. Jan. 19 to the Superintendent of the Carman-Ainsworth Community Schools, Administration Building, G-3475 W. Court Street, Flint, Michigan 48532. Eligible applicants must reside in the C-A school district.

Hatcher’s term expires December 31, 2022 and Crane’s term ends Dec. 31, 2020. To retain their seats, their successors must run on their own in the November 2018 general election.

The board expressed appreciation for Hatcher and Crane’s for their service.

“Their 20 years of combined service and dedication have greatly benefited the district and their attention to detail and high level of integrity made them exceptional role models for current board members,” said Superintendent Eddie Kindle, in a press release.

As for their future plans, Crane said she also has retired from her career job at Genesys Regional Medical Center on January 10.

“I am getting married soon and will be moving to Florida,” she said. “I have enjoyed being on the school board and will sincerely miss working for our children, but it is time for me to make a change in my life.” She’s served on the board since July 2010.

Hatcher also called it “an honor and a privilege to serve on the Carman- Ainsworth Board of Education for the last twelve and a half years.”

Hatcher said she is resigning due to a need to shift her priorities and time commitments.

“Serving the Carman-Ainsworth Community Schools has been one of the most rewarding endeavors I have embarked on,” she said “I started in 1997 as a parent representative for the Quality Education Committee now referred to as District Curriculum Committee. From there I became involved with the CARES committee when we were trying to pass our bond proposal.”

Based on those experiences, she ran and won an open seat on the board in July 2005.

Over the years she has served with 14 different board members and four superintendents.

” I truly believe each one of us was brought here to serve a purpose and when we move on someone new comes along and fulfills their own unique purpose,” she said.

Effective Friday, Jan. 19, the seated C-A board officers and members are: