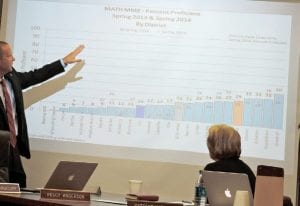 FLINT TWP. — An embargo lifted on Aug. 13 allowed data to be released for the Michigan Department of Education 2014 Michigan Scorecards.

Carman-Ainsworth Steve Tunnicliff shared results with the school board last week as part of his Annual Education Report (AER) on students’ progress.

He also reported on bullying incidents during the past school year.

Carman-Ainsworth School District received a yellow ranking, indicating it met 76.9 percent of targeted goals. All schools are expected to reach 85 percent proficiency by 2022.

The report also breaks down data by subgroups and for different subjects. For example, the high school ranked red in math but green in all other subjects including reading, writing, science and social studies.

C-A hit 80 of the 104 indicators for which it is rated, Tunnicliff said, adding that district has more indicators than less diverse districts. The overall 77 percent ranking would merit a lime color instead of yellow if not for belowpar subgroups.

“If you have any schools in the orange or red category or if you have a Focus school, the best you can do is yellow,’’ he said.

The MDE Accountability report also ranks schools from top to bottom statewide and labels some as Priority, Focus or Reward Schools based on whether they are performing at top levels (Reward); in the bottom five percent (Priority) or have a large achievement gap between the top 30 percent and bottom 30 percent.

C-A’s Rankin Elementary fell into the Focus school category this year. However Dillon Elementary, which was identified as a Focus school last year, improved enough to be removed from the list this year, a major accomplishment, that is hard to do, Tunnicliff said.

In a separate report, Tunnicliff also shared data about bullying incidents, in compliance with Matt’s Law, requiring all Michigan school districts to have an anti-bullying policy.

C-A board policy defines bullying as a repeated malicious behavior that targets the same student or a person who targets multiple students. It is not as simple as one second-grader calling another one stupid, Tunnicliff said, explaining why C-A’s bullying incidents may seem low. In some cases, incidents are not reported because victims do not want to be called a snitch.

The numbers reported are incidents and not necessarily the number of bullies. In some cases, there are multiple offenses by the same student.

Districtwide there were a total of 13 incidents last school year involving 19 students compared to 27 in 2012-13 involving 35 students, the first year data was recorded.

Tenth graders were involved in the most incidents – nine. One incident was reported among first graders and fifth graders and none for grades 2, 4, 6, 7 and 8 and 12.

C-A schools have several proactive anti-bullying programs in effect including the Empathy for All student group at the high school and a Be Kind to Everyone initiative at the middle school.