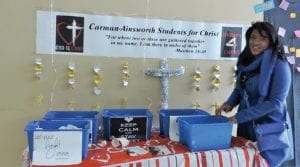 Reality Edwards created a prayer wall and motivational area for her Capstone Project.

FLINT TWP. — Colorful sticky notes bearing prayer requests from students are taped to a cloth hanging in a hallway near the north entrance to Carman- Ainsworth High School.

Next to the “prayer wall” is a table full of freebies accompanied by an inspirational message.

Other bins contain free pencils, jewelry and What Would Jesus Do? stickers.

The encouraging gift display is the brainchild of Reality Edwards who created it as her Legacy Capstone Project for English 12.

All C-A seniors are involved this year in creating Capstone Projects. The year-long assignment began in the fall with research on a community problem and evolved into a project designed to help or educate others, said Carrie Mattern, a C-A English teacher who is guiding 120 seniors through the process.

It is the first year for the projects which were based on Davison High School Senior Exit Projects that Mattern learned about from a neighbor last summer.

C-A students had to write a business proposal, get it approved, enact the project and write a final reflection paper, Mattern said.

Reality, who is also president of C-A Students 4 Christ, came up with her project idea after reflecting back on what her needs were as a freshman, she said. She plans to attend the University of Michigan- Flint with a career goal of becoming a registered nurse and opening a chain of clinics.

Norman Kolena is another senior with a widely-praised Capstone Project He set up a drop-off center for Toys for Toys in the school media center which will be collecting donations through the end of this week.

The project coincides with Norman’s goal to enlist in the Marine Corps. which sponsors the annual holiday toy drive. Norman plans to study mechanical engineering.

As their Capstone Project, cousins Mariam Rabah and Raneem Daaboul, who are Muslim, presented an informative talk for young girls at Randels Elementary school about the significance of wearing a hijab head covering.

The idea was to start the cultural education process early, Typically, Muslim girls begin wearing the head scarves at about age 13 or 14, depending on family beliefs, Mariam said.

They answered questions about wearing the hijab and showed the young students how to wear one.

For their joint Capstone Project, Jared Young and Taylor Talbert are creating a Professional Clothing Closet that will loan free business attire to students to wear on job interviews, at college job fairs and during their Senior Exit Presentations.

They have set up a drop-off box to collect gently worn business attire. Their goal is to establish a permanent project that will be carried on after they graduate. Jared plans to study business at UM-Flint and Taylor plans to pursue a career in special education starting at Mott Community College and finishing up at Michigan State University.

C-A students will be asked to join in the fun of Fashion Week, April 14-18 as part of Jewel Langston’s Capstone Project. The aspiring fashion designer has created theme days for each day of the week culminating with semi-formal wear on Red Carpet Day on Thursday, leading into CA’s annual spring fashion show.

As her project, Charveya Turner developed a peer counseling program and a social media page that serves as a hotline. She also will be spending a couple days each week counseling middle school student with discipline problems which is right on point with her goal to major in psychology at Texas Southern University.

For his project, Ma’Lik Gill is organizing a club to help students find volunteering opportunities to beef up their resume or scholarship applications. Ma’Lik got the idea from his own volunteering experience as a member of the National Honor Society. He realized that students who don’t have high enough g.p.a.s to be eligible for the honor society still need ways to get valuable volunteer experience, he said.