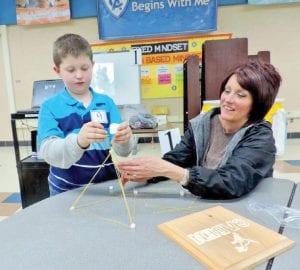 One hands-on challenge was to figure out the best shape to build a structure using spaghetti straws and marshmallows. This young man figured out that a triangular shaped was sturdier than a square one.

STEM is short for science, technology, engineering and mathematics which is a primary education focus right now to prepare students for jobs of the future.

At the free Family STEM Night event, students learned STEM skills by building beanstalks from pipe cleaners, erecting building made of spaghetti and marshmallows, earthquake testing straw buildings; steering computer-driven cars; building boats from aluminum foil; creating DNA strands and much more, CA students of all ages and their parents got a hands-on look at what STEM education has to offer.

“This is for everyone,’’ said Dave Swierpel, C-A Director of Community Services. “Some people have the perception that STEM education is only for those who are gifted in science or math but it is broader than that. It includes medical fields.” 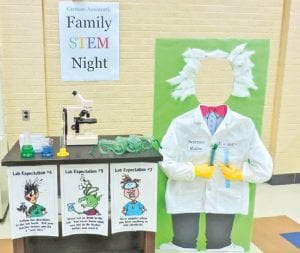 C-A was the first school district in the state to offer a Project Lead the Way STEM curriculum for students in grades K-12.

Programming at the elementary level aims to pique interest.

“What we are trying to do is build that interest by exposing them to what STEM is all about and let that carry through to middle and high school,” Swierpel said.

This year, a Gateway to Technology curriculum at the middle school includ- ed automation and robotics and modeling (engineering), Swierpel said. Next year, thy will be adding a computer component to PLTW programming.

At the high school, students can take courses in biomedical science and engineering. Beginning in the 2017-18 school year, a computer science component will be added.

Also starting next fall, the high school will begin offering the C-A STEM early college in partnership with the University of Michigan- Flint. It will have two tracks – biomedical science and engineering. Students enrolled in the courses, that will be offered on site at the high school, will be able to save as much as $20,000 off college tuition by taking college level courses early.

Representatives from Baker College and Mott Community College attended the showcase event to talk about STEM offerings at the college level including photons and lasers, prosthetics, engine building and more. Alex Randall, a senior at Kettering University and Josh McMullen, a recent Mott Community College graduate, have teamed up to commercialize their STEM talents.

They demonstrated their robotic beverage dispenser, aka Robotender, which is an extension of a project started at MCC. Still a prototype, when ready in a few months, the device will have many uses including assisting bartenders on busy nights, said McMullen, a former waiter.

Besides dispensing all types of beverages, it also will be able to add toppings such as whip cream to cocoa, Randall said.

It can improve a restaurant businesses or can be applied to home use, they said.

The two are working on other fun robotic prototypes as well.

Tentatively they are calling their budding business Axiom Concepts because it sounds fancy and high tech, Randall said. They’ll be looking to funding platforms such as Kickstarter to get up and running when they are ready to launch, they said.