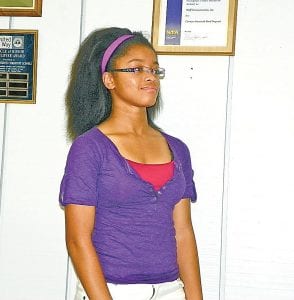 Having been accepted in the Youth for Understanding international educational exchange program, Rani has decided to spend the first semester of her junior year living with a South African host family and attending a public school over there.

She wants to study abroad because she loves learning about different cultures and exploring the world.

“I hope to immerse myself in the culture and grow as a person, in terms of becoming more independent and wellrounded,” she said of her anticipated journey.

She won’t know which province/city she will stay in until a few weeks before she leaves in late August for a 15-week stay, returning home in December, said her father Recco Richardson, who sits on the C-A school board.

Rani’s mother still is warming up to the idea but her dad is excited to see his accomplished daughter tackle a new challenge.

“Personally I’m excited about her willingness to branch out and explore the world,” Richardson said. “She has always marched to a different drumbeat and loves challenges and unique opportunities.”

A great deal of planning is required to coordinate traveling, funding and educational aspects for Rani’s in-depth YFU cultural adventure.

There are no plans for a South African student to attend C-A in exchange and Rani is the only and first student from her school to elect to study in South Africa, according to C-A counselors Bobbi Jo Lowe and Nancy Galassini, who are working with the Richardson family to arrange the educational side of Rani’s trip.

Lowe consulted a study abroad agency to learn how the education system works in South Africa. She’s worked out a schedule of proposed classes likely for Rani to take in South Africa. C-A will transfer credit for those classes when Rani comes back, Lowe said.

The South African school system is noted for high scholastic standards that incorporates arts and sports into the curriculum. Students also are required to wear a uniform, according to YFU.

At CAHS, Rani has distinguished herself as a scholar and athlete. She finished second this year in the countywide spelling bee for 9-12 graders and she’s also a standout on C-A’s girls’ track team.

Rani plans to participate in athletics in South Africa school, her father said, adding that they are weighing options for Rani to take some core classes online to make sure she meets requirements for her senior year of athletics at CAHS.

More fundraisers are planned such as selling Mother’s Day roses, a garage sale, a read-a-thon and a youth basketball tournament, Richardson said.

Rani also has applied for five scholarships. She’s a semi-finalist for the $3,000 Temple-Krick Scholarship offered to Michigan students participating in YFU exchange programs. Rani will be notified this month if she is the winner, her father said.

The YFU South Africa program began in 1995 after the end in 1990 of the country’s apartheid segregationist system, which was before Rani was born. Now there’s an equal chance that Rani’s host family could be white or black, according to background information provided on the YFU website.

Founded in 1951, YFU hosts programs in 64 countries and has administered global travel for more than 250,000 students who have forged lifelong friendships and gained perspectives that are hoped to foster cross-cultural understanding and world peace.