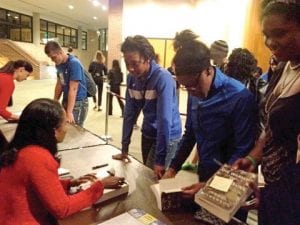 C-A students were invited to a free lecture on the Michigan State University campus where they met two prominent journalists and received signed book copies.

FLINT TWP. — On Thursday, Oct. 2, more than 100 juniors and seniors from Carman-Ainsworth High School traveled to Michigan State University’s Wharton Center for the Signature Series Lecture — part of MSU’s Project 60/50, a yearlong community conversation on civil and human rights. It commemorates the 60th anniversary of the Brown vs. Board of Education Supreme Court decision and the 50th anniversary of the 1964 Civil Rights Act

C-A students were invited to attend the event free of charge through Janet Swenson, C-A’s Project Write II and III coordinator, according to a press release. 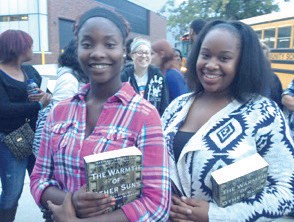 Students also received a copy of Wilkerson’s book and. had the opportunity to speak to her and get it signed.

Project 60/50 launched in January in conjunction with MSU’s birthday celebration for civil rights leader Martin Luther King Jr. It is coordinated through MSU’s Office for Inclusion and Intercultural Initiatives, featuring a variety of lectures, symposiums, workshops and programs held on MSU’s campus.

Upcoming-ticketed events include a performance by the Dance Theater of Harlem on November 12. For a calendar of all scheduled Project 60/50 events, visit the website at project6050. msu.edu/events%20news/index. html