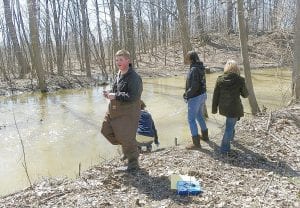 Water testers at the river’s edge. Kyle Glinka of Carman-Ainsworth Middle School wore his waders but teacher decided water too high for him to go in.

FLINT TWP. — Arriving at the muddy banks of Kearsley Creek after a 10-minute trek through the woods at Burton’s For-Mar Nature Preserve, about 20 biology students from Carman-Ainsworth High School found the murky water moving too fast and deep for wading. But that did not deter them from a hands-on lesson in water quality.

They were there to take and test water samples as part of GM GREEN (Global Rivers Environmental Education Network), an annual Earth Week event that involves about 8,500 students in environmental consciousness projects.

GM GREEN is a partnership between community-based organizations in General Motors’ communities and Earth Force, a non-profit organization based in Denver, Colorado that advocates environmental awareness and leadership among young people.

The GM GREEN’ local community partner is the Flint River Watershed Coalition, which has coordinated the effort since 1990. Middle- and high-schools throughout the county sent students out into the field to gather water samples from Flint River tributaries.

GM will take results of the tests students run and compile data that helps determine the area water quality, said Irene Bashore, a GM environmental engineer, assigned to mentor the Carman-Ainsworth crew. She will follow up the field trip with a visit to the classroom.

“If we see issues (in water quality) we figure out why and how to correct it,” Bashore said.

The students came prepared with sampling gathering kits but most returned to the classroom to conduct the tests, said Julie Lawrence, a C-A science teacher who accompanied them to For-Mar.

Kyle Glinka, a student, wore waders in anticipation of his walk in the water but Lawrence decided water levels were too high to risk it. Water testing on the previous day at Davison Middle School was shut down because of high water levels after a heavy rainfall the night before, said Bashore, who also mentors that group.

Carman students had better luck. Glinka stepped into the edge of the water to conduct his temperature test. Shane Wells gathered what he needed to conduct a turbidity (clarity) test.

Kristen Borse and Megan Floyd gathered water to test for phosphorus and Cionna Orr and Sarah Owens filled baby food jars with mud and water for their benthic (organism) testing.

Back in the classroom, most test results came back moderate to good, Lawrence said. Only the nitrate levels came in rather high but that could be due to runoff from the heavy rainfall the night before, Lawrence said. But the pH was 7.0 — a great number, she said.

“The Flint River runs are much better than people think,’’ she said. “What is great about this activity is that it proves that it (pollution) is a myth.”

These tests show that the overall health of Flint River water, and what Bashore calls Q values are pretty good. In the years that these tests have been done, the Q values usually come back in the 70-80 range which is good compared to 90-100 which is excellent. Rarely do results come back in the poor range, she said.

The Flint River Watershed comprises 18 smaller watersheds and encompasses seven counties, 20 cities and villages, and 58 townships. That gives students a lot of water to work with and learn from.

“I’ve seen how this program inspires youth to address local issues once they’ve uncovered them firsthand,’’ said Sue Lossing of the Flint River Watershed Coalition, which promotes protection, preservation and improvement of local ecosystems. “Real world problem-solving is a great way to pique their interest in math and science, and working side by side with people who have made a career out of these skills goes a long way.”