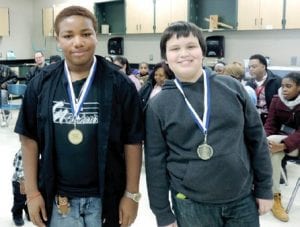 Winning team members proudly show off their medals for fielding a robot that scored the most points during a Stemnetics robotics competition at the middle school last week.

FLINT TWP. — After about two months of learning to build and program a robot in an after-school program, students at Carman-Ainsworth Middle School showcased their work in a robotics competition last Thursday.

“This is like a hands-on final,” said Seun Phillips, executive director of STEMNETICS, a Grand Blanc-based educational company on a mission to interest young people in careers in science, technology, engineering and math (STEM) fields.

STEM is a buzzword in education and the focal point of project-based learning at Carman-Ainsworth to prepare students for in-demand jobs with higher earning potential.

Phillips first visited CAMS in October to conduct a free workshop that introduced students to fun STEMNETICS activities by building and launching a small cardboard rocket.

About ten students signed up for the fee-based after-school program, which led to last week’s robotics showcase.

“We call it the Bee competition,’’ Phillips said of a tabletop course where students tried to earn points by programming their robots to complete several tasks including gathering “food” and depositing it in a beehive, activating a sprinkler in a flower bed and moving a beehive cone around the board.

Working in groups, the students were given two minutes and fifteen seconds to complete the steps. Students also earned points for an oral presentation showcasing what they learned in the program.

The winning team received first-place medals and, to their obvious delight, gift cards to Subway.