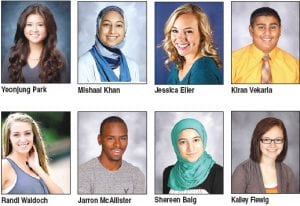 FLINT TWP. — Yeonjung Park graduated at the top of her class with a 4.0 g.p.a. She is the daughter of Sam and Kwang Park.

Yeonjung was class president for the past three years and vice president of the Student Council executive board in her senior year; president and treasurer of the Health Occupations Students of America (HOSA); president and secretary of the Mayoral Student Cabinet; president and vice president of the World Cultures Club; captain of girl’s Varsity Tennis; captain of the varsity Quiz Bowl Team; captain of the Science Olympiad team; a member of the National Honor Society and much more. She has volunteered at Hurley Medical Center, the Soup Kitchen and the Food Bank and tutored elementary and high school students. She was named WNEM- Channel 5’s Best and Brightest of Mid-Michigan, October Student of the Month. She plans to major in Biochemistry at the University of Michigan- Ann Arbor, where she received a full-ride scholarship. She wants to become a pediatric oncologist. 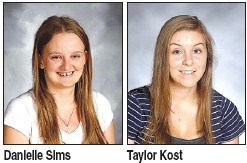 Mishaal Khan ranked second in the class with a g.p.a. of 3.996. She is the daughter of Farhan and Samia Khan. Mishaal played tennis all four years of high school. She was President of National Honor Society, Vice President of Muslim Student Association, Captain of Science Olympiad during junior year, a member of HOSA, the World Cultures Club and more. She served for two years as a representative on the School Board of Education, was nominated Student of the Month of October, is one of WNEM TV-5 “Michigan Best and Brightest” and a Priority Children’s Champion Nominee. She has volunteered with the Food Bank, Habitat for Humanity, Hurley Medical Center, Day of Dignity and more. She will be attending the University of Michigan this fall, majoring in History while being Pre- Med.

Jessica Eller ranked third with g.p.a. of 3.984. She is the daughter of Kenneth and Zondra Eller. She served as Parliamentarian on the Executive Board of the National Honor Society. In her junior year, she co-founded Empathy for All, the school’s anti-bullying awareness group, and served as its president of two years, She was awarded Student of the month by the Genesee Rotary Club and also received a Children’s Champion Award from Priority Children. She was co-captain of the junior varsity volleyball, soccer and tennis teams. She has received the Jean Fairfax Scholarship and will attend the University of Michigan- Ann Arbor where she will study sociology. She plans to go on to law school and become a human rights lawyer.

Kiran Vekaria ranked fourth with a 3.962 g.p.a. He is the son of Harish and Jyotshna Vekaria. He was a member of the Varsity swim team for the past four years, golf for two years, and the Blue Brigade band for four years. As a swimmer, he received the Academic Scholar Award and the Leadership Award. Kiran was also active in the National Honor Society, Empathy For All and Student Council for which he was the treasurer. During his senior year, he competed in the Science Olympiad competition, placing first in Chemistry Lab, second in Write It, Do It, and sixth in Remote Sensing. Kiran was a part of Kettering University’s AIM program last summer and obtained a full-ride scholarship. He also received a Flint Kiwanis Scholarship. He plans to attend Kettering University to study Applied Physics with a concentration in Material Science.

Randi Waldoch finished 5th with a 3.940 g.p.a. Her parents are Richard Waldoch and Julie Prince. Details about Randi’s accomplishments were not available.

Jarron McAllister ranked 6th with a 3.928 g.p.a. He is the son of Andrea McAllister and Royal Alexander. He was a Varsity swimmer for three years, earning the “Guts” award his junior year. He also was a varsity tennis player and helped out during the girls’ season. He was a member of the National Honor Society and vice president and Student Council treasurer for sophomore, junior and senior years. He participated in Science Olympiad, was a member of Empathy for All and performed skits for elementary students. Jarron won a scholarship to attend Princeton University where he will study molecular biology.

Shereen Baig ranked 7th with a 3.921 g.p.a. She is the daughter of Mirza and Azra Baig. She was captain of the soccer team for two years and received two CANUSA games medallions. She as a member of the Muslim Student Association for four years and served as president of the executive board in her senior year. She was a member of the National Honor Society, serving as its treasurer for the past year. She participated in HOSA, Science Olympiad, and Project Cavalier. Outside of school, she was vice president of the Flint Islamic Center Youth Group, vice president of the Flint Mayoral Cabinet, a member of the Youth Advisory Council of Greater Flint and the Muslim American Society. She was active in community service and received the Most Outstanding Member of the National Honor Society. Shereen will attend the University of Flint-Honors College where she plans to take pre-law courses while majoring in Communications.

Kailey Fiewig ranked 8th with a 3.911 g.p.a. Her parents are Scott and Karen Fiewig. Kailey is a fiveyear member of the Blue Brigade marching band and a four-year drum major. She won the Blue Brigade Award and the Director’s Award in her senior year. Kailey received superior ratings every year at both district and state solo and ensemble, nominating her for the Michigan Youth Arts Festival. She was a two-year member of the National Honor Society and the CORE team. This summer, Kailey will be touring with the Bluecoats Drum and Bugle Corps and will attend the University of Michigan-Ann Arbor in the fall to study Music Composition.

Danielle Sims ranked 9th with a 3.894 g.p.a She is the daughter of Michael and Karen Sims. Danielle was a member of the Varsity golf team her Junior year and the Varsity bowling team her Junior and Senior years. Danielle was named a member of the Big Nine All Academic Team both her Junior and Senior years for bowling. She has participated in charity work for the Genesee County Humane Society, Leader Dogs for the Blind, and Iron Dog. Danielle plans to attend Baker College of Flint majoring in Veterinary Technology and hopes to continue her education to get a degree in Veterinary Medicine.

Taylor Kost ranked 10th with a 3.889 g.p.a. She is the daughter of Robert and Shelley Kost. Taylor was a member of the World Cultures Club and served as its secretary for three years. As a member of the National Honor Society, she participated in the food drive and baby-sitting of young children. Taylor was on the Varsity tennis team for four years and was a member of the Big Nine All-Academic Team for two years. The season she played number one singles and was awarded Most Valuable Player. Taylor has received the Gary Somers Scholarship and hopes to attend the University of Michigan-Ann Arbor where she will study anthropological archeology and Scandinavian studies.