C-A voters renew millages but say no to new tax 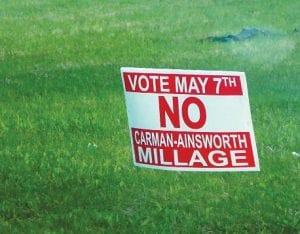 School and township officials don’t know who was responsible for anti-millage signs like this one that began cropping up about a week before the election.

FLINT TWP. — Voters in the Carman- Ainsworth school district said yes to two tenyear millage renewals but no to a new school tax in Tuesday’s election.

Voters were asked to renew 18 mills tax on Non-Homestead Property and a half-mill levy for the district’s Building & Site Sinking Fund which is used for maintenance and improvement.

They also were asked to approve an additional half-mill sinking fund tax that would have raised the sinking fund total to one-mill.

In pre-election voter information, the district outlined in detail what was done with previous sinking fund millage money and also plans for future sinking fund projects.

It is not known which, if any, of those projects may not go forward as a result of voters rejecting the half-mill sinking fund increase.

In a pre-election sign of at least some voter anti-millage sentiment, yard signs urging a no vote began appearing around the township about a week ago. They were unsigned, giving no indication to township or school officials or residents what group was behind them.