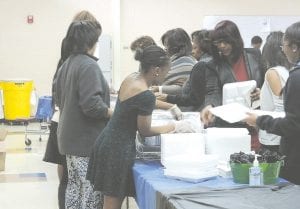 Dotson, a Flint native and winner of the 2010 Sybyl Award among numerous other accomplishments, shared with the students her humble beginnings growing up on the north end of Flint.

“I think it is really important to give back,” she said. “A lot of the time people ask me ‘where do you find the time to give back, to be out in the neighborhoods dealing with young people, with gangs and bullying and black on black violence and crime and people doing mean, hateful stuff?’”

“I have no choice but to look back to my own childhood and think about how somebody gave to me when I was you all’s age, even when I didn’t believe in myself even when I walked out of my (Alma Street) house on a daily basis and did not understand what I saw.”

Dotson founded WOW Outreach about nine years ago as a community action group that works directly in neighborhoods and forms community partnership to work with youth and combat violence.

Change does not just happen, she told the students, commenting on T-shirts she saw some wearing that said Change Begins with Me.

“We are the change we want to see,” she said. “If we don’t give back and stand for something, that change will not occur.”

As a young person, Dotson said she was not thinking about her future or attending college or becoming the change agent she is today.

“I was caught in a cycle of poverty and a mindset where I was just existing,” she said. “It is important to have a community of caregivers — people who will encourage you and tell you who can be,” she said.

Statistics show that those who are born into poverty tend to stay poor; those raised in a one-parent home have drastically lower chances for success in life; and those with parents who abuse drugs or alcohol are significantly more likely to continue that pattern, she said, drawing from her social work background. Dotson’s life path took her from working “at every corner store in Flint” to becoming the woman she is today – a mother, a college graduate, a social worker, a community leader and a mentor.

“People look up to me,” she said. “So many people counted me out when I was 14, 16, 18, 21. Like some of you in this room so many people have counted you out. Don’t allow that; as long as you have breath in your body you have a chance to become anything you want to do.”

She concluded her remarks with a quote from activist Cesar Chavez who said, “We cannot seek achievement for ourselves and forget about progress and prosperity for our community. Our ambitions must be broad enough to include the aspirations and needs of others, for their sakes and for our own.” Chane Clingman, advisor of the CAHS African American Students Association which sponsored the luncheon, assured Dotson that whoever counted her out, couldn’t count.

“You are an awesome woman. I have seen your work in the community with the young people and people of all ages. Please continue,” he said. The luncheon program also included student contributions including a spoken word recital by Chesley Fairhurst and a song by Ashlei Wells. Clingman cited a lengthy list of accomplishments by African-American inventors.

“I want you to leave here today inspired,” he said to the students. “Other people have their story to tell; what will your contribution be? It won’t be long before you guys do something and somebody will stand up and talk about you.”