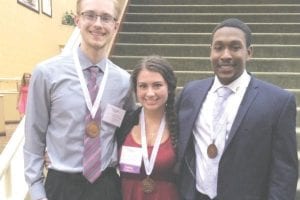 Joshua Cunningham, Antonio Parks, and Leticia Silva placed third at the state HOSA competition, earning a spot at the International HOSA meet in Florida next month.

FLINT TWP. — Three Carman- Ainsworth High School students won third place in the HOSA- Future Health Professional Michigan State Conference and are now eligible for a “once-in-a-lifetime” chance to compete within a group of 15,000 people at the HOSA International Conference in Orlando, Florida.

HOSA is an extracurricular student organization focused on medical and leadership skills of high school students in Medicine and Health Care classes, said Kim Confer, C-A teacher and advisor for the C-AHS HOSA chapter. HOSA students do many service projects throughout the year and can also attend competitions

“They created a 30-second PSA and a presentation to accompany it,” Confer said. “Their presentation was labeled “Unsafe drinking water: the disaster you’re not prepared for” and they won the silver medal at regionals.”

Nearly 2,500 students from around the entire state competed in various events at the Michigan conference. Joshua, Antonio and Leticia ‘s third-place finish at the state competition qualified them to represent Michigan and C-AHS at the HOSA International Conference to be held at Disney’s Coronado Springs Resort in Orlando Florida, June 21-25.

There, they will compete again, but this time against other PSA teams from across the country, Mexico, Canada, Puerto Rico, and American Samoa, Confer said. At internationals, they will need to take their public service announcement through preliminary judging and compete to get to the final round.

The students did a gofundme page to help cover their hotel and transportation expenses. The C-A HOSA chapter is assisting with the conference fees, but most of the financial responsibility falls on the shoulders of the participants, she said.