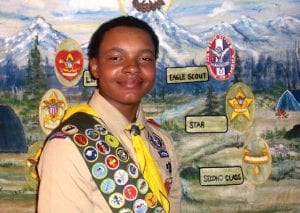 Haywood James Petty, a 10th-grader at Carman-Ainsworth High School will receive his Eagle Scout award in a May 11 ceremony at Flushing Valley Country Club.

FLINT TWP. — Haywood James Petty, a 10th-grade student at Carman- Ainsworth High School, has earned his Boy Scout Eagle Rank and will be honored in a special ceremony at 4 p.m. May 11, at the Flushing Valley Country Club.

The public is welcome to attend.

Petty, 15, is a member of Troop #174. With help from other troop members, family and friends, as his special project Petty built three, wooden, movable park benches for the playground area at the Boy and Girls Club of Greater Flint on Averill Avenue.

“Haywood’s motivation for this special project came from desire to help a worthy organization, impact the local area where he was raised and help inspire young people to become caring citizens,’ said his mother Develle Johnson.

“I very proud of him. He set a goal to attain Eagle Scout before he turned 16,’’ she said. “I am very proud of the young man he is turning out to be.’’ 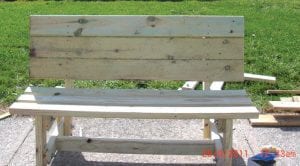 Having completed the requirements for the rank of Eagle Scout and having been examined by an Eagle Scout Board of Review, Petty will become the fifth member of Scout Troop #174 to achieve this rank.

Petty said he acquired supplies for the project through donations including wood from Home Depot. Rules prohibited him from purchasing any of the materials.

First he designed the benches on paper, but later found a photo of one on the Internet that he liked better, he said.

Petty has been active in the Boy Scouts since fifth grade.

He aspires to become a professional golfer and is a member of C-As varsity golf team and the varsity swim team. Career Plan B is to become a radiologist, he said.

He is hoping to win a golf scholarship to the University of Florida.

Petty said he knew from his first day of scouting that he someday hoped to reach the Eagle Scout rank. Being a scout has helped him become a more well-rounded person, he said.

He’s enjoyed opportunities such as fishing trips, high adventure camps, earning an aviation certificate for flying a plane and helping out in the community by volunteering at the soup kitchen or ringing the bells for the Salvation Army holiday fund drive.