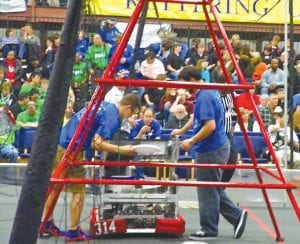 Blue teams lined up against red teams to see which robot could toss the most Frisbees into a goal, basketball style, then climb up on a pyramid during matches at the FIRST in Michigan district robotics competition last weekend at Kettering University.

FLINT TWP. — The Megatron Oracles, Team 314, of Carman- Ainsworth High School were among 39 schools competing last weekend in the For Inspiration and Recognition of Science and Technology (FIRST) Robotics Competition district tournament held at Kettering University.

The three-day event began Thursday when maintenance pits opened for teams to set up.

Competition in the event called Ultimate Ascent involved teams being split into two alliances – with three red teams and three blue teams. Guided by computer operators on the sidelines, the robots on the playing field competed to score by tossing Frisbees into goals at each end of the arena. Higher positioned goals netted higher scores during the two-minute-fifteen-second match.

At the end of the match, the robots earned additional points by climbing a color-coded pyramid located at each end of the field. Teams were ranked based on total points earned during the competition.

District matches where teams compete to earn more points are being held statewide during the rest of this month. The top 64 ranked teams in the state will move on to compete April 11-13 at the state championship at Eastern Michigan University.

Michigan’s top 27 teams will go on to compete at the World championship in St. Louis.

FIRST Robotics Competition started in 1989 as a means to interest young people in science and technology. FIRST divisions are offered at all grade levels.

FIRST Robotics Competitions are open to students ages 14-18 in Grades 9-12. This year, more than $16 million in scholarships is up for grabs nationwide for participants in FIRST Robotics competition.