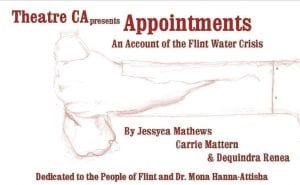 Back by popular demand, C-A theater students will present an encore performance of “Appointments: An Account of the Flint Water Crisis,” at 7 p.m. on Saturday, February 4 at the high school auditorium.

FLINT TWP. — Anyone who missed the original performances of the play “Appointments: An Account of the Flint Water Crisis,” will get another chance this weekend at an encore performance, 7 p.m. Saturday, February 4 at the Carman-Ainsworth High School auditorium. Tickets are $5 at the door.

“The play is set almost three years from now in a doctor’s office,” said Dequindra Renea, co-author of the play with Jessyca Mathews and Carrie Mattern, who are both English teacher at CAHS and also published authors. “It focuses on a few patients that come to the office because they know it has been dedicated to helping the people who have affects because of the water crisis.”

Mattern approached Renea “sometime in mid-July” about collaborating with Mathews to write the play. After meeting to share ideas about the plot, the women each wrote parts of the play then compiled their writing, Renea said 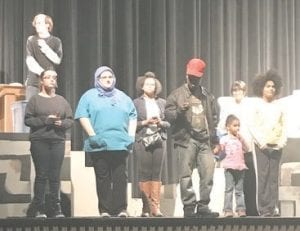 In turn, Mattern, an English teacher, had been talking for many years with Delynne Miller, CAHS theater director, about collaborating on something.

“I’m an author and also sponsor Empathy for All at Carman, a bullying awareness group,” said Mattern. “We tried a few ideas but no luck. Then when my daughter, Claire, made the Support Flint shirts for her Blueberry Ambassador project, I figured it out and talked to Delynne about the Flint water crisis last year” Mattern went to work but was unhappy with her first draft.

“It felt force-inauthentic so I scrapped it,” she said. “I knew I needed help in making realistic characters so that’s when I called Jes and DQ (DeQuindra), both talented writers and friends. We often help critique and edit each other’s work, but we’ve never collaborated on something. I knew this was the perfect project to do so.”

The three women developed a concept that included a diverse cast to reflect the people of Flint. 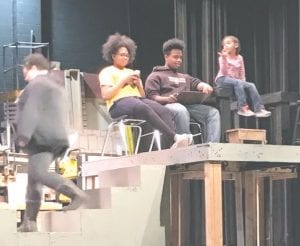 “It paid homage to Dr. Mona and her work (publicizing the adverse impact on children’s health), as well as the hidden heroes. It also suggests that together we have to be unified to fight the fact that we still do not have clean water in Flint,” Matten said.

Mattern also is the faculty sponsor for Empathy for All, a C-A students’ bullying awareness group.

Renea is a recent graduate of The University of Michigan-Flint with a Bachelors in Human Resource Management. She also is a published author, having produced first book in 2014 and another in 2016. “Appointments” is her first playwriting effort.

“For me, the motivation for writing the play was to use what I love, writing, to raise awareness about this situation that is not only happening now, but is something residents would be dealing with for a lifetime,” Renea said “ I wanted to shed light on the things that are going on that are not being talked about: the post-traumatic stress that residents- like myself- are facing and how we will never be comfortable drinking tap water again, even outside of Flint, the stress parents are facing with trying to protect their children from the water, as well as how people may be abusing this water situation for their own selfish gain.”

Renea also noted that many CA students are also affected by the water crisis.

The play’s first run was Jan. 19-21. The encore performance is by request and also to give more people an opportunity to see this locally produced play about a far-reaching local issue.