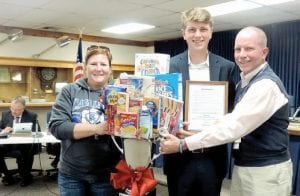 FLINT TWP. — Fresh from winning the 2016 ABC12 Spirit Cup annual school contest last week, students from CAHS headed over to the township board meeting Monday night for special recognition for that achievement.

Tom Klee, a CAHS instructor and announcer, credited a “community effort’ with beating out stiff competition to reclaim the trophy presented each year to the school that collects the most food during the course of the year to benefit the Food Bank of Eastern Michigan.

C-AHS won this year by collecting about 115,172 pounds of food, he said. C-AHS is reclaiming the trophy it first won when the annual competition began in 2009. After a couple of “soft years,” coming in second place, fourth place etc., the students got in gear this year and set out to reclaim the crown. They were edged out last year by Owosso when a sugar beet farmer showed up at the last minute with a truckload of sugar beets, he said. Klee credited this year’s winning effort to students Noah Vanderhyde and Victoria Young. Vanderhyde was present for the proclamation presented by the township board. Young was attending a softball game so her mother Leslie stepped in to accept on her behalf. All Top 10 schools attended the Spirit Cup finale held at 6 a.m. May 13 in the C-AHS gym, which drew nearly 1,000 people, Klee said.