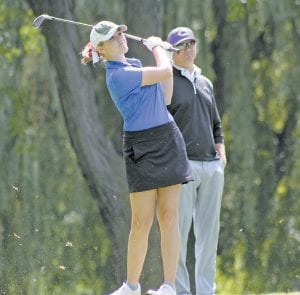 Carman-Ainsworth’s Sloan Barclay represented the Lady Cavs as their only golfer at the Div. 1 regional last Wednesday at Hartland.

HARTLAND – Brighton, Lapeer and Hartland claimed the top three spots at the Div. 1 regional at Hartland Glen Golf Course last Wednesday, moving on to the Div. 1 state meet tomorrow and Saturday at Forest Akers East on the campus of Michigan State University. Brighton carded 314, Lapeer 342 and Hartland 345. Davison was fourth with 350, Grand Ledge fifth with 369, Holt sixth with 373 and Milford seventh with 374. Grand Blanc was eighth with 377, Howell ninth with 378, Saginaw Heritage 10th with 404 and Carman-Ainsworth 12th with 3120. Sloan Barclay was Carman-Ainsworth’s only golfer at the regional and finished off her high school career with a 123.