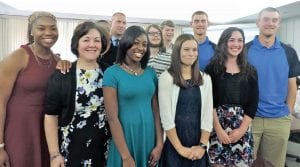 These graduating seniors were recognized by the board of education for already earning college credits by participating in accelerated and dual-enrollment courses.

FLINT TWP. — While fellow students enjoyed summers off, a stalwart group of young scholars at Carman- Ainsworth chose to spend their time in programs such as Accelerated Graduation Opportunity (AGO) and Dual Enrollment Educational Partnership (DEEP), where they earned college credits.

Eight of them were among 10 seniors whose accomplishments were singled out last week for special recognition by the board of education.

Noah took part in the DEEP Medical Sciences Program and the DEEP Environmental Sciences Advanced Placement (AP) Courses. He served as president of the Student Council executive board and also was the senior student representative on the C-A school board. He is a member of the symphony band. he plans to attend Lake Forest College.

Dymond earned college credits in a dual enrollment program at Mott Community College. She plans to attend Michigan State University to study nursing. She was a varsity cheerleader, president of the African-American Student Association, a student council representative and member of the Health Occupations Students of America (HOSA).

Randi also participated in the AGO program took AP Courses, was involved in the Genesee Career Institute Visual Digital Communications courses. She was a member of the varsity basketball and track team, Student Council Class president and vice president of the National Honor Society. She plans to attend Brown University.

Jalen was involved in the GCI Sports and Entertainment Marketing Course, varsity football and track. He has signed a national letter of intent to play football and plans to attend Northwood University.

Alanna spent three summers in the AGO program, enrolled in the Project Lead the Way Engineering Program, took AP courses, and has earned dual enrollment credits at Kettering University where she plans to attend full time after graduation. She also was named the 2015-16 Career and Technical Education (CTE) Student of the Year.

Emily also spent three summers in the AGO program, took AP courses and participated in the DEEP Medical Sciences Program. She has signed a letter of intent to play women soccer and plans to attend Concordia College.

Twins Dahlia and David have somewhat twin resumes. Both were part of the AGO program, took Advanced Placement Courses and were members of the symphony Band. Dahlia also was dual enrolled at UM-Flint where she plans to continue her education, studying theater. David also plans to attend UM-Flint to study computer science.