AGO is a go for high schoolers to graduate early 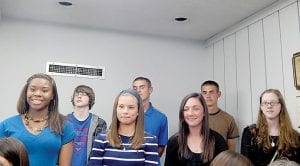 The school board congratulated these sophomores for earning college credits in a summer program.

FLINT TWP. — More students are earning college credits while still in high school and one group at Carman-Ainsworth High School is willing to give up summer vacations to do so.

Eight current sophomores who did that were lauded for their efforts by the school board at its Tuesday night meeting.

During the summer, the students participated in the inaugural year of the Accelerated Graduation Opportunity (AGO) program set up for students to either graduate early or be eligible for dual-enrollment in college during their senior year of high school, said Deborah Davis, CAHS assistant principal, program coordinator.

“It was not meant to be for everybody,’’ said Superintendent Steve Tunnicliff. “Yes you have got to give up a lot of time in your summer. But I think you will reap the benefits long term.”

Twenty-three middle school students were eligible to take part in the first AGO cohort but only eight remained to be recognized by the board. They are twins Ray and Ryan Macko, twins Dahlia and David Kassel, Randi Richardson, Emily Johnson, Alanna Gleason and Nick Carter.

The started the program the summer before freshman year in high school by earning two high school credits in either health or computer essentials, Davis said. They earned one high school credit this summer and can earn one each each additional year until graduation. They also earned four college credits this summer in Baker’s Introduction to Engineering class.

Dahlia Kassel said the program provided a unique way for her to learn about engineering. Emily Johnson said she gained knowledge helpful to her robotics team.

Tunnicliff thanked the students and parents for their patience while working out glitches in the first-year program.

He thanked Baker College for providing professors and programming for the first program. Plans already are in place for the second cohort next summer that will be hosted by the University of Michigan-Flint with a focus on data research. AGO organizers hope to work with either Kettering University or Mott Community College for the third year with a goal of involving all four post-secondary institutions, Tunnicliff said.