CA gearing up for homecoming week 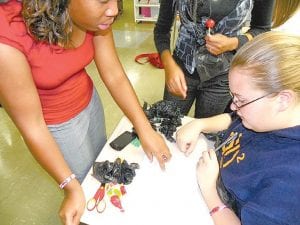 These students are going over plans for the float as they rally sophomore volunteers to get the construction done for the Oct. 14 Homecoming parade.

FLINT TWP. — A week of fun and fundraising lies ahead as Carman-Ainsworth celebrates Homecoming Week with a host of spirit activities, two football games, a parade and traditional dance.

The winners’ names will be announced during half-time at the football game against Davison High School on Oct. 14.

A Homecoming Prince and Princess also have been selected for each of the lower grades.

Empires of the World is this year’s Homecoming theme and is being featured on specially designed class T-shirts, parade floats and at the Homecoming Dance. 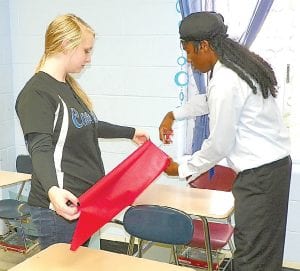 TEAMWORK — These sophomores at Carman-Ainsworth High School are working together to help make the thousands of flowers needed for the sophomore class float.

Each grade level is creating a parade float based on their chosen empire. The Freshman have Persia, the sophomores China, the juniors Egypt and the seniors have Sparta.

Spirit Week activities kick off Monday with Kooky Clothing Day at the high school when students will wear oddball clothing such as mismatched shoes.

Junior girls will vie against senior girls in a Powder Puff football game at 7 p.m. Monday night while guys will be cheerleaders. Admission is $5 per person with proceeds going to support theater department productions.

Tuesday’s Spirit Week theme will be Decades Day when students will wear clothing from another era such as poodle skirts from the 1950s or Afros and disco duds from the 1970s.

On Wednesday – Celebrity Day – you might see anybody from Elvis to Lady Gaga walking the halls that day, said Rachel Sherwin, Student Council President.

On Thursday, Superhero Day, there will likely be a lot of Batmen and Catwomen spotted in the halls.

Friday is Class Pride Day when many students will wear the special Empires T-shirts that are color-coded by class level and are being sold to raise money for Student Council activities.

The Homecoming Parade starts at 4:30 p.m. Oct. 14 at South Baptist Church on Van Slyke Road and will proceed south to Maple Road then east to the Middle School where tailgate parties will precede the football game at 7 p.m.

Bonnie L. Haffajee, principal of Randels Elementary, was selected by the Student Council to be the parade’s Grand Marshal. Haffajee has worked in the district for 21 years and served as Randels principal for the past 12. She also taught at Dye and Carman Park elementaries.

“I am very touched at being chosen grand marshal of the Carman Ainsworth Parade because students made the decision,” Haffajee said. “It is very gratifying to know that students who left Randels several years ago have such positive feelings about their principal. … This appointment makes me feel that I have connected positively with my students on their journey through school.’’

Festivities will wrap up on Saturday with the Homecoming Dance from 8-11 p.m. on October 15 in the high school gym. Tickets are $10 each and student ID or a guest pass is required for admission. Proceeds will help the junior class with planning the senior prom.