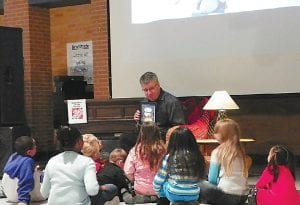 FLINT TWP. — Seated in a traditional storyteller pose with children gathered around his feet, Carman-Ainsworth Superintendent Bill Haley delivered a rendition of the Christmas classic “ The Night Before Christmas’’ with a modern twist. He read it from an iPad.

Yes, Virginia, there is an App for that. iPads were introduced as a techno-teaching tool in some CA high school classes this year.

Haley was featured as part of the entertainment at the 4th annual CA WinterFest celebration held on Saturday at the middle school. Designed to bring the community together to support agencies who provide help to families during the holidays, proceeds from WinterFest benefit Old Newsboys, the Salvation Army, the U.S. Marines Toys for Tots program and the Food Bank of Eastern Michigan.

Featuring free food, fun and entertainment community event is sponsored by the Carman-Ainsworth Men at W.O.R.K. program, which provides opportunities for fathers and men to become actively involved in children’s education.

Kildee estimated that 1000 to 1200 people attended the come-and-go-as-youplease event over the course of four hours.

The collection netted 900 pounds of food donated to the Food Bank, enough to provide 540 meals to needy families, he said.

Also about $2000 in cash donations were taken in to support Winter Fest and the participating charities, Kildee said.

The National Junior Honor Society did arts and crafts with younger children and helped them decorate a Christmas cookie, Kildee said.

And what kind of Christmas party would it be without Santa Claus who was on hand to pose for pictures with the children and present each one with a toy.