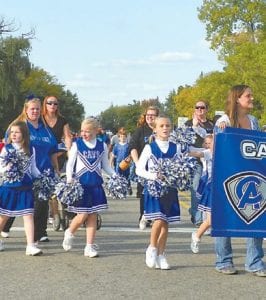 School spirit starts young as demonstrated by these students at the Homecoming Parade.

Brittany is the daughter of Lisa and Freddy Aragon. She has been in gymnastics for 13 years and is a level 10 Competitive Gymnast. She has qualified for both regional and national Jr. Olympic gymnastics teams for the last 4 years. She is a two time USA gymnastics national team member. In 2008, she was the regional 5 champion and ranked 8th in the Nation for her floor exercise. Brittany has been on the honor roll her whole life. In her sophomore year she began to be scouted by several universities. Brittany has accepted a full-ride athletic scholarship to Western Michigan University where she plans to study exercise science.

Clamentia is the son of Latrice Hall and Clamentia Hall Sr. He is head drum major of the Blue Brigade Marching Band, president of Band Council, secretary of the National Honor Society, and a member of Empathy for All. He is a three time solo and ensemble state finalist in band competitions, receiving first division ratings each time. Clamentia also sings with the CA praise team and choir and plays the piano at his church. In the future, he plans to attend college and major in secondary music education and instrumental instruction, with a minor in secondary English education. He hopes to one day organize youth symphonies across the county and forward the profits to pediatric health organizations. 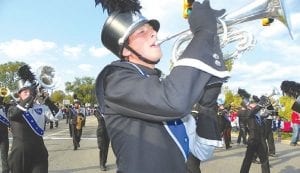 In other Homecoming activities, the Juniors beat out other grade levels to win the coveted Cavalier Class Spirit Cup, which goes to the class that accumulates the most points all week for supporting the overall theme of Homecoming week. Students earn points for a class T-shirt design and for their float entry.

Up against the freshman’s Donkey Kong, the sophomores Tetris and the seniors Super Mario, the juniors carried off the top honors for their Pac Man float entry which recreated a large Pac- Man chasing a ghost labeled Northwestern along with other ghosts labeled with the names of other competing schools.

The winning sophomore T-shirt design was Heather Gray and featured a Tetris game board on the front with the Tetris shapes crushing opposing schools in the division. The backs of the shirts had the quote “Game Over; The Odds Were Stacked Against Them,’ which turned out to be case in CA’s 58-0 victory over Northwestern in the football game.