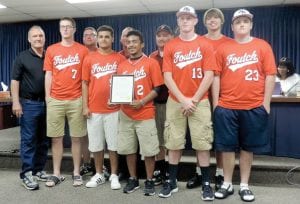 Business owner Roger Foutch, coaches and players for Foutch’s Strike Zone baseball team received a proclamation from the township board in recognition of a very successful season.

FLINT TWP. — Jawanza Edwards and Cooper Betancourt, both juniors at Carman-Ainsworth High School, were among a team of high school baseball players from Genesee and Lapeer counties recognized by the township board for an outstanding season.

A proclamation presented Aug. 11 to Foutch’s Strike Zone applauded owner Roger Foutch and saluted his contribution to amateur baseball including “sponsorship of the Flint area’s first team ever to qualify for the Mickey Mantle World Series in McKinney, Texas.”

Foutch’s Strike Zone, 1477 S Linden Road, served as the 2014 training facility for one of the greatest amateur baseball teams ever assembled in local history, according to the proclamation.

“Head Coach Ben Almasy led Foutch’s Strike Zone to the Flint area’s first Mickey Mantle North Central Regional Championship with victories at Coldwater, Mich., over state championship teams from Illinois and Indiana and a victory over perennial Michigan powerhouse Michigan Bulldogs program that includes more than 30 players drafted by Major League Baseball Clubs and more than 400 who have gone on to the collegiate ranks,” it stated.

Foutch’s Strike Zone was assisted by its off-field team of sponsor Roger Foutch and his staff that included Dave Dohrman, Jeff Hamilton and Brandon Reed.

Edwards, a utility infielder, and Betancourt, an infielder, were among six team members who attended the board presentation.

Foutch’s Strike Zone, an indoor baseball and softball training facility lived up to its motto “Where champions come to train.”

Also, Malaki Edwards, 10, a C-A 5th grader who is Jawanza’s brother and the team’s bat boy, also traveled with the team on its winning run.