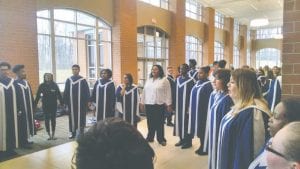 CAHS choirs warm up before their “excellent” performance last month at the district Choral Festival.

The Women’s Ensemble performed “But a Flint Holds Fire.” a piece about the Flint water crisis composed by renowned composer Andrea Ramsey.

“Our choir students participated in the lyrics,” said Faith Yassick, CAHS Choral Music Director. “We received a standing ovation by audience and judges (which is unheard of at Choral Festival).”

At the Choral District Festival held each year at Swartz Creek Performing Arts, high school choir performances are adjudicated by four judges. The judges give feedback on their choral performance and the choirs receive points for specific categories such as tone quality, interpretation, diction, and presentation, said Yassick. They also must sight read music for a rating. That means that students are given music that they have never seen and must sing the exercises as a group to earn points.

“It was a memorable experience for the choir and one that I will forever remember as a highlight of my career at C/A,” she said.

The highlight was the presentation by the 40-member Women’s Ensemble of “But A Flint Holds Fire” which included spoken contributions between musical passages that incorporated the frustration of the students who experienced the water crisis.

For example, one young lady said: “My siblings and I were all tested for lead poisoning. A week passes and my mom finds out that all four of her kids have lead poisoning, including the baby. My mom and dad were angry. I didn’t want to believe it was true.”

Because of the I rating (excellent) all CAHS choirs qualified for State Festival in May at Central Michigan University, where the Women’s Ensemble will again perform “But A Flint Holds Fire,” for a panel of judges.

This song is in the process of being printed by a publisher and will be available in the next month or so, Yassick said.