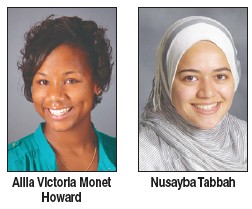 Howard is the senior class president and was consistently active in student government, swimming, lacrosse and the National Honor Society.

She played saxophone in the Blue Brigade Marching Band for three years and served as the student representative on two school improvement curriculum committees.Sheisaacertifiedlifeguard at the YMCA in Flushing and an intern at a local law firm. She plans to attend Kalamazoo College in the fall, majoring in business and pre-law and aspired to attend law school to study corporate law. Her parents are Rickey And Cynthia Howard.

Tabbah was an active member of the Health Occupations Students of America (HOSA) in which she placed first in regional and state competitions for poster design. Her artwork placed second in the U.S. Congressional Art Competition and is on display at the Flint Institute of Arts. She also is a member of the Muslim Students Association. 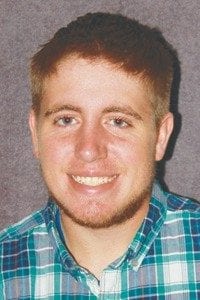 Her volunteer work has included the Healing Flint conference, Ross Manor Nursing Home, Day of Dignity food and clothing drive and soup kitchens in downtown Flint. Tabbah plans to study engineering at the University of Michigan in Ann Arbor and hopes to someday create innovative technology that has a positive impact on people’s lives. She is the daughter of Jenan Jondy and Jalal Tabbah.

John Collins, son of Mike and Marcy Collins, finished third in his class with a 3.985 g.p.a. He scored a 31 on the ACT test and excelled in advance placement classes. He played varsity soccer with honors and was a member of the National Honor Society. He was a three-year member of the Business Management and Administration program and named Technical Student of the Year. He plans to attend the University of Michigan- Flint on four-year scholarship with a goal of obtaining his M.S and an M.B.A. degrees in computer science and information systems. 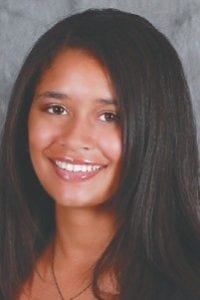 Whitney Elizabeth Reynolds finished fourth in her class with a 3.964 g.p.a. She was active in student government, the National Honor Society and varsity tennis. She served two years as the student representative on the Carman-Ainsworth Board of Education and was president of HOSA in her senior year. She plans to attend the UM-Ann Arbor to study business and pre-law with a goal of becoming a corporate lawyer. Her parents are Sharon and Edward Reynolds.

Emily Bodine and Douglas S. Robinett finished in a fifth-place tie with a 3.926 g.p.a.

Bodine was a member of the National Honor Society and an active volunteer at Michigan Christian Youth Camp and the Food Bank of Eastern Michigan. As part of CAHS’ Fine Arts program, she participated in eight theater productions and received the Troupe 1360 Honor Thespian Award. She is a five-year member of the Terry Matlock School of Performing Arts competitive dance team and has placed in the top five at the national level. She has been accepted in the Rochester College Honors Program and plans to major in secondary education with a goal of becoming a biology teacher. She is the daughter of James and Lory Bodine. 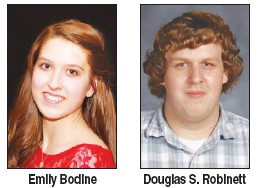 Robinett has received many awards and certificates for his participation in the Biotechnology program at the Genesee Area Skill Center. He enjoyed participation in HOSA. He plans to attend Kalamazoo College on a $52,000 scholarship.

Jennifer Klapko and Aubrey Mikovits tied for seventh-place with a 3.924 g.p.a

No biography for Klapko was provided by press time.

Mikovits won honors at a member of the varsity volleyball and varsity softball teams including the United States Marine Corp. Distinguished Athlete Award. She participated in HOSA and the National Technical Society and was a member of The 21 Club which is based on high ACT scores. She has been accepted at Eastern Michigan University and plans to major in biology with plans of becoming a dentist. She is the daughter of Damon and Jennifer Sewell. 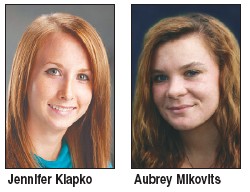 Steven Little finished ninth in his class with a 3.921 g.p.a. He was an honor roll student throughout high school and participated in Community Based Instruction with jobs at Randels Elementary School and Ruggero’s restaurant. He plans to study graphic design or machine desgin at the Michigan Career & Technical Institute. His parents are James and Trixy Little.

Ashleigh King finished tenth in her class with a 3.913 g.p.a. She won honors at a varsity swimmer and tennis player wand was four-year member of the student council. She was a leader in HOSA and earned gold medals in creative problem-solving at the regional level in 2011 and 2012. As vice president of the National Honor Society, she participated in many community service projects. She plans to attend UMAnn Arbor with a double major in English and business while also acquiring pre-medical prerequisites. Her parents are Frederick and Bethany King. — Compiled by Rhonda Sanders 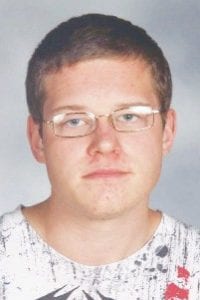