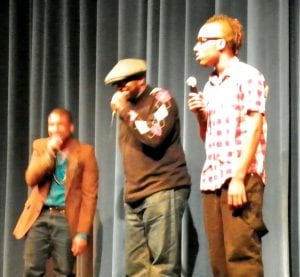 Singers, rappers, comedians and actors took their turn in the spotlight before an appreciative cheering audience. Some of the singers inspired the audience to sing along to popular tunes.

Bill Schnorenberg, a member of the CAHS security staff and also assistant freshmen basketball coach, kicked off the show, cranking up the crowd with his “old school” rendition of LLCoolJ’s “Mama Said Knock You Out.’’

Later in the show Chane Clingman, the show’s organizer, joined the fun with a soulful performance of Skylark’s 1970s classic “Wildflower” (let her cry ‘cause she’s a lady).

Clingman is also the staff sponsor for CAHS’ African American Students Association which benefits from talent show proceeds. Clingman said money raised by the $8 per person talent show tickets will go toward two scholarships presented to deserving students at the end of the year.

“Every year our crowd keeps getting bigger and bigger,’’ Clingman said of the huge turnout.

Clingman is a behavior interventionist at the high school and also organizes a fashion show in the spring.

The purpose of the the African American Students Association is to promote positive behavior, raise selfesteem, and enrich the school and community through education, outreach, and self-discipline. AASA members will be volunteering at a soup kitchen this week, Clingman said.