CAHS grads appointed to school board 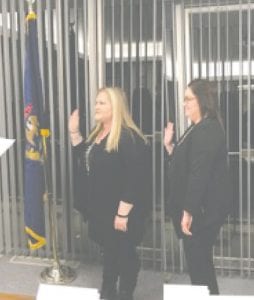 Crystal Dahl and Keri Crane were sworn in on Feb. 5 as new C-A board of education members.

FLINT TWP. — Like mother, like daughter is one way to describe the two newest members of the Carman- Ainsworth Board of Education. Both have a surname that is familiar in public service.

Keri M. Crane, 24, is the daughter of Joy Crane who resigned in January after serving seven and a half years on the C-A board. Crystal Dahl, 25, is the daughter of Carol Pfaff-Dahl, a member of the Flint Township board of trustees since November 2016.

Crane and Dahl topped three other candidates who also applied for the two vacant seats on the board.

Both women were sworn in at the February 6 board meeting for terms that end December 31 this year. Both must run to retain their seats in the November general election.

Both also are Carman- Ainsworth High School graduates – Dahl in 2010 and Crane in 2012.

Crane works as an adoption specialist for Catholic Charities and is currently working towards her master’s degree in criminal justice and administration.

Her interest in becoming a school board member is because of her “passion for helping children better themselves through education.” she said.

“I believe there is no better place to follow through with my passion than at Carman-Ainsworth. The school gave me so much as a student there in the past.”

Dahl is a 2016 graduate of Michigan State University with a bachelor’s degree in communication and is employed at Huntington National Bank as a branch relationship banker. She also worked for C-A as an intern from September 2015 to June 2016, according to her LinkedIn page.

She applied for the board of education position because she “is a firm believer in giving back to my community,” she said.

“Children are our next generation and it is our responsibility to make sure they get every chance to succeed that they can,” she said.

She is a member of Central Church of the Nazarene and involved in the choir and the praise team.