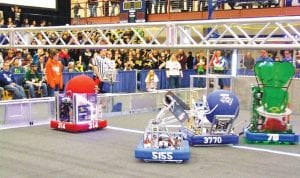 A look at some of the action at the recent FIRST Robotics competition where CAHS Team 314 ranked second in overall competition.

CAHS Team 314 was among 40 competing high school teams from around the state including eight other teams from Genesee County – Davison, Fenton, Flint, Goodrich, Grand Blanc, Lapeer, Linden and Swartz Creek.

This year’s game is called “Aerial Assault” where each team’s robots plays both offense and defense similar to hockey and basketball while trying to score balls into goals. The game is played by two competing Alliances of three robots each on a flat 25 foot by 54 foot field with a truss suspended about five feet above the floor. The objective is to score as many balls in goals as possible during a two and one half minute match.

Team 314 racked up the following accomplishments in the Kettering competition, according to CAHS robotics advisor Ellen Crain: 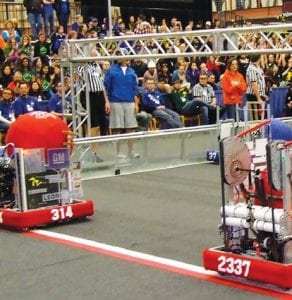 * Was selected by the 1st Alliance Captain to be a partner with Team 2337, Grand Blanc Enginerds.

* Played in the Elimination matches. Went all the way to the finals.

* Won the Motorola Quality Award. This award celebrates machine robustness in concept and fabrication. The winning team demonstrates these characteristics in many ways from planning through execution. Building the robot is only part of their success and the judges recognize them as a quality example to others.

In the judges’ own words: ” This team showed forceful robustness in design, build and control with control over the playing “Pit.” They hatched a bot that could shoot venom like a viper with speed and accuracy.”

*As a result of these results, Big Mo is currently in 5th place out of about 150 teams that played in the State of Michigan and has earned 69 points earned towards qualifying for the Michigan FRC State Championship, April 10-12.

For the 15th year, Kettering has hosted FIRST Robotics competitions in its recreation center. The University also awards several FIRST Robotics scholarships every year and is currently developing a state-of-the-art FIRST Robotics Center that will eventually provide design & building workspace for many local teams. Kettering students will serve as mentors.

“Hosting the District competition every year is a great opportunity to introduce Kettering and its outstanding engineering and science programs to high school students from around the state who attend,” said Bob Nichols, Kettering director of alumni engagement, who has been involved with FIRST Robotics since 1998. “FIRST Robotics serves as a great discovery lever to excite young people to get interested in STEM (Science, Technology, Engineering and Math) careers.” — Rhonda Sanders