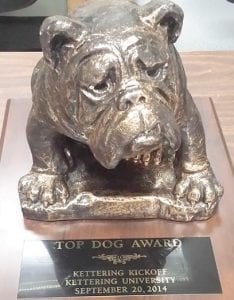 Forty-two of the best high school robotics teams from across the state participated in the popular annual contest that matches last season’s FIRST Robotics with this year’s high school teams, according to information provided on the Kettering University website.

Kettering has hosted the event since 1999. Teams forms alliances to play a game called the Ultimate Ascent. Each Alliance consists of three robots, and they compete to score as many discs into their goals as they can during a 2:15=minute match. The higher the goal in which the disc is scored, the more points the Alliance receives.

The CAHS team, Megatron Oracles (Big Mo) competed in an alliance with Truck Town Thunder from Brandon High School and the Robostangs from Northville High School.

The Carman-Ainsworth team also won the Kick Hunger Award for contributing the most food for the Food Bank of Eastern Michigan).

“Like all Kettering Kickoff events, it was highly competitive as there are a lot of talented FIRST teams around the state,” said Bob Nichols, Kettering University director of alumni engagement and founder of the Kettering Kickoff. “The games were intense, but as always with FIRST, the kids also had a lot of fun and displayed great sportsmanship.” — Rhonda Sanders