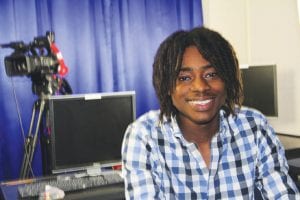 Cameron Edwards of CAHS is a semifinalist in the Meijer high school student competition.

FLINT TWP. — Cameron Edwards, a senior at Carman- Ainsworth High School, is continuing his winning ways in video- and filmmaking.

In February, Cameron was named first runner-up in the Detroit Pistons Black History Month scholarship competition, winning a $5,000 prize for his original speech and video.

Cameron submitted four entries in the contest and has been named a Top 10 finalist. His PSA is one of 60 that will be shown in a VIP ceremony and reception for finalists and their families on June 7 at Cinema North in Grand Rapids.

Also the winning PSA in each category will be reproduced on DVDs and distributed to schools across the state as tools for their Character Education, Health Education and Diversity programs. The DVD’s will also be made available to all Meijer stores and to the media.

The purpose of the film festival is to highlight the talent of Michigan’s audio/visual students while allowing these students to make a positive impact on the state’s K-12 education programs.

Cameron is also invited to attend a Film Maker’s Workshop run by Compass College of Cinematic Arts, who will be awarding a $1,000 scholarship to one of the finalists.